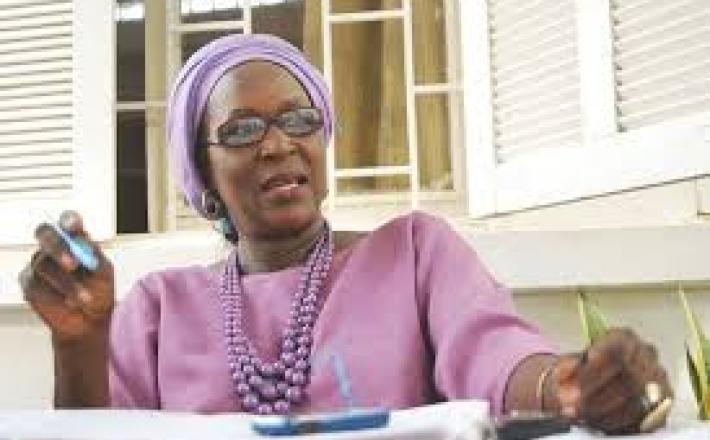 iKNOW Politics: Thank you for granting us this interview.  Tell us about Amsatou Sow Sidibé, what is your background? How did you enter politics?

I am a Senegalese woman, an aggregate qualified professor and Chair of the Private Law Department. I am Director of the Institute of Human Rights and Peace at the University of Cheick Anta Diop. I have been engaged in academia for more than 30 years and trained entire generations, with more than 4000 young people graduating each year destined for high-level executive positions in the country.

I am a Senegalese woman who has worked extensively in the field, in particular as President of the African Network for the Promotion of African Women Workers (RAFET), which operates in more than 40 localities in Senegal and various other African countries. Amssatou has worked hard for women's rights. I originated the first draft legislation on violence against women, since one of the studies I conducted with women parliamentarians in Senegal was used by the Ministry of Justice as the basis for drafting the law. The idea of a law on parity was born in my office.

I am a woman who did much to shape the law on health and reproduction.

I am a woman who has advanced many reforms on behalf of women in Senegal. Amssatou has supported children by creating "SOS right to education" and by helping Senegalese students avoid what would otherwise have been a lost academic year. Amssatou initiated the first national conference, bringing together in an amphitheatre the party in power, the opposition and civil society to reflect on the country's political situation. During this conference, Amssatou called on students to return to their classes.

iKNOW Politics: At what point did you decide to enter politics? What triggered your decision?

The only trigger was the general situation of the country. Senegal is suffering a great sickness. The ship is taking on water on all sides, and men and women alike must use all of their strength to keep it from capsizing.   All Senegalese people, of every political persuasion, suffer when legal instruments are rigged and institutions are undermined. What we have seen in recent decades obliges us to dedicate ourselves to serving the Senegalese people. If we fail to act we become complicit. For all of these reasons we have created a citizens movement, because the people, who have not been respected, should have the last word. This movement has captured the interest of many Senegalese people, who for decades have observed that we are not evolving normally and that our rights have steadily eroded. It is because the Senegalese people aspire to break away from the status quo that we have created the Convergence of Actors in Defence of Republican Values "CAR Lenen".

The aim is to break out of the chaos and the cronyism, reverse the deterioration of our values, overcome our failure to compete and stop treating our citizens like children. We need a national surge forward, placing people at the centre of our concerns.

iKNOW Politics: Since your arrival on the political scene, what have been the major challenges you have had to face?

I have found great support in Senegal and among the diaspora. People are saying that with a woman in the race, a mother sensitive to the problems of the Senegalese people, they can finally feel hope. They say here is a woman who has proven her qualifications. I have many male supporters, female supporters and young supporters. The great challenge, and something that has always been an impediment for women in politics, relates to resources. The limited representation of women in decision-making positions is partly attributable to the limited resources available to women politicians. Personally, I was able to overcome a number of other challenges, such as keeping up a household. As a committed woman, I have always been supported by my husband and family – the problem has to do with resources. To improve representation for women, affirmative measures are needed for the financing of women candidates. The change must consist of more than a speech. Concrete measures are needed in support of women.

iKNOW Politics: You said that the idea of a law on parity was born in your office. One year now after its adoption, what can be said about its application?

Women talk about parity everywhere, even in the bush. They bring parity to the leadership and they demand parity. I think it has already been very successful. Several women have considered my candidacy entirely normal, which would not have been the case in earlier times. They say they have always supported men and now that parity has been adopted they often support women. Women know that if a woman is elected their concerns will be better taken into account – a woman who assumes power having been a mother, with boys and girls, and who could never discriminate against either gender.

iKNOW Politics: What do you think about an initiative like iKNOW Politics, using new technologies to promote women in politics?

iKNOW Politics is an excellent political instrument for promoting women to leadership positions, as a matter of human rights and development. How can a country be developed if more than half of its population is marginalized? Nor should we ignore women as a human resource, whose value must be maximized. True parity requires frank policies. In Senegal, since independence, we have had three male presidents and the country has not developed. The time has come to try a woman. Women can manage everything and can deal with several things at once. Let's give a chance to qualified women who can bring about the changes so long anticipated.

iKNOW Politics: What do you call upon women to do?

I ask women to support my candidature. I have proven myself. I have a decade of experience and I invite women to rally around my campaign to bring change at last to Senegal.