Graça Sanches, one of the youngest Members of Parliament in Cabo Verde 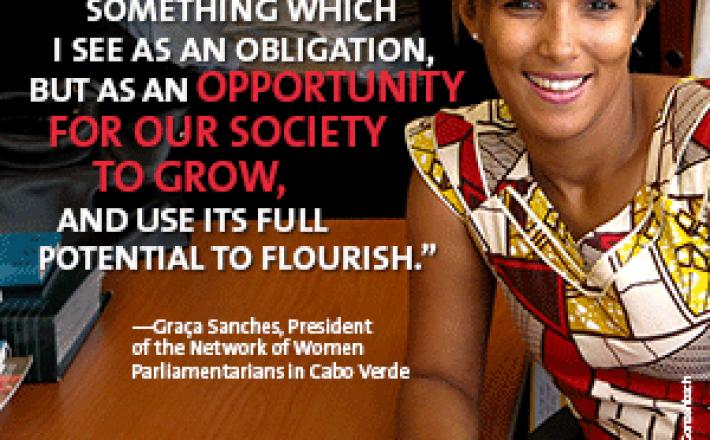 On the islands of the archipelago that make up Cabo Verde, a country off the coast of western Africa, she is a household name. One of youngest Members of Parliament in Cabo Verde, Graça Sanches became a parliamentarian at the age of 30. Raised in a humble environment in Praia, her priority has also been to make sure that all people, especially the impoverished and marginalized, were given the same rights as other citizens. She is also the President of the Network of Women Parliamentarians.

Her inspiration, she says, was her mother who worked as a teacher, nurse and social worker, and was a living example of compassion, taking care of the needs of her fellow humankind. She carries that message and says, “For me, being in politics is a way to influence policies towards a more equal society.”

Urging, often compelling her compatriots to recognize the plight of those living in poverty, the majority of them being women, the Network of Women Parliamentarians acts as a lobbying body, ensuring that women are aware of their rights and given the tools necessary to claim them.

The road she has travelled has been far from easy, from people who tried to dissuade her from joining politics, to finding a balance between being a young mother and her political avatar, championing for the masses. But people say she has proven to her country that she is certainly up to the task.

Here, the young parliamentarian talks about why she chose to serve her country, and those most vulnerable.

Can you tell me about how you see women’s particular situation in Cabo Verde?

As women are generally the majority of the victims of poverty, we have to guarantee their equal access to opportunities and give them support in difficult life situations. The Gender-based Violence Law, passed in 2011, enhances the capacity of law enforcement officials to respond sensitively and promptly to cases, and sets up coordinated prevention strategies, which I was able to support. With other deputies from the Network of Women Parliamentarians, we went to different communities to inform people about the new law. Especially in the rural areas, the impact was very big. Many women we met suffered from domestic violence and didn’t know about their rights.

Every woman has the right to be heard and to have the same opportunities. I defend women’s rights not as something which I see as an obligation, but I see it as an opportunity for our society to grow, and to use its full potential to flourish.

What are some of the obstacles to reducing poverty?

We have several programmes to address poverty in my country, but the different programmes sometimes don’t have clear indicators to analyze the impact on women’s lives. Another obstacle to poverty reduction is the fact that we have a lot of women, heads of family, who raise their kids by themselves without any support from the fathers. We need to raise special budgeting and programmes to combat the feminization of poverty.

How did growing up with the family that you had impact your interest in the ways to end poverty?

I guess that my involvement in politics has much to do with my childhood and the way I was raised. Since I was a child, I was always taught to help and to share with others what I had. That’s why anything that has to do with asymmetries and inequalities touches me. For me, being in politics is a way to influence policies towards a more equal society.

What are some of the challenges you have faced in the typically male-dominated profession of politics?

When I entered the Parliament [of Cabo Verde] in 2011, many people told me that my life would change for the worst. They told me that being a woman, and on top of that, being very young would not work for a parliamentarian. In the beginning, I felt very discouraged and even thought to give up because I already had a very good position being the Director of pre and primary school in the Ministry of Education. But I decided to continue. And now I can see that being a young woman is an opportunity and not an obstacle. Now I am very much respected for the work I do.

What message would you give to young girls who want to be where you are today?

One of the most important things in life is to have an objective, and a goal you want to reach. I always say that women and girls - wherever they come from and under whatever circumstances they grew up in- have to understand that they are important for the society in which they live. They need to be self- confident and never give up on what they actually want to happen in their lives.