Member of Parliament in Canada 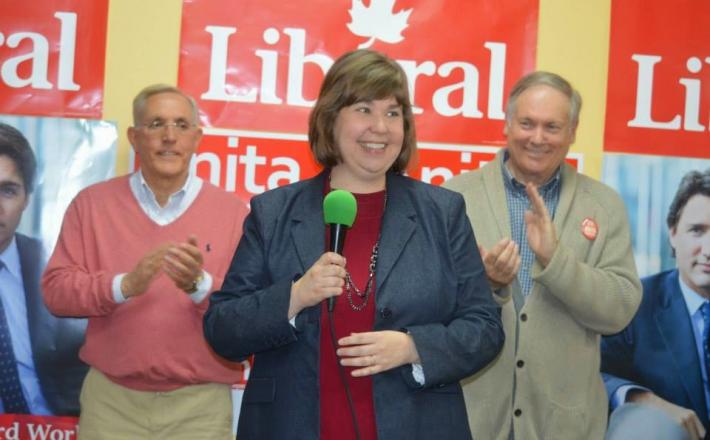 iKNOW Politics interviewed Ms. Anita Vandenbeld, newly elected Member of Parliament (MP) in Canada and member of the Liberal Party. Ms. Vadenbeld reported to us over the phone that in the recent election, she had the highest number of votes of any woman in the Liberal Party as well as the fourth highest number of votes among women across all parties and constituencies. She also added that she did not run a typical campaign as she moved away from “the same old thing that all the men did before and instead reached out to people and groups that never engaged in politics before”. As a previous iKNOW Politics Coordinator, Ms. Vadenbeld assured that she entirely credits her innovative campaign and her success to the lessons she accumulated during her iKNOW Politics adventure as she proudly said “I am here because of iKNOW Politics!”. Ms. Anita Vandenbeld mentioned an example that made her campaign untypical. On one of her trips to Africa as the iKNOW Politics Coordinator, she met elected women in Liberia that went every Saturday to the local market so that citizens from their constituency have access to their elected parliamentarians. This practice gave her the idea to commit to go every Saturday and be available for two hours at a coffee shop in her local shopping mall in Canada. It appears that she is the only Canadian MP who follows this practice. Ms. Vandelbeld pledged that she will try to continue this practice as an MP. The Canadian politician added that she has been deeply moved by the women she met in Liberia as she also reported that is where she heard the most articulate political speech, which was given by an illiterate woman.

1. It seems like the 2015 election reached a record in terms of women elected to the House of Commons. How do you explain this success?

I think there was a lot of political will, especially from some of the parties’ leaders, because usually the nomination convention is very limiting to women. Indeed, it was not always possible to nominate women, even if the parties wanted those women to run. The new measure does not allow political parties to go ahead with the nomination to select a candidate unless they could show that they had done an active search for qualified women and at least one or two women were on the ballot. This did have an impact, I believe. Furthermore, one of the women MPs had the role and responsibility to give advice on how to get more women and she ended up being a real champion for some of the female candidates. She was somebody that I could call, as a candidate and say I need this or point to ineffective processes in the party, and she would get this feedback to the election committee. Actually, it is not completely true that women participation in the House of Commons has increased after this election. We were around 26% and now we are at about 24%. The breakthrough is actually not happening at the House of Commons level but in the cabinet. And this is fantastic because this is the first time that a Canadian Prime Minister commits to a 50/50 cabinet. That is huge. He certainly has gotten a lot of heat for it, but I think he is contributing to a major culture shift. It is not just women, there are a lot more visible minorities, and there are different age groups as well. One of the cabinet members is a young thirty-year-old woman who was a refugee from Afghanistan. She is the Minister of Democratic Institutions. We have also a former bus driver Minister of Infrastructure, and an aboriginal woman as Minister of Justice. In fact, her first act was to open an investigation on murdered and missing indigenous women. The change is really the political will coming from the top.

2. Question about fundraising. Any specific challenges that you or women in particular face when running for office? Is there enough party support?

Fundraising is always an issue. In Canada however, it is not as big of an issue as in many other countries. Canada always had spending limits and transparency requirements for election campaigns. For years, women caucus exercised a tremendous amount of pressure as they called that having spending limits on the election is not enough and that spending limits also need to be put in place on nominating conventions. Thanks to the efforts of the women caucus, spending limits were put on nomination campaigns and now nomination campaigns have the same reporting requirements with transparency, disclosure and limits on donors. For the nominating campaign, which is equivalent to the primary, my spending limit was $17,000. And for the election campaign, it was about $214,000. Now, having said that, there are obviously challenges. I personally did not have big issues with fundraising, but I know a lot of women did. My party offers help through the Judy LaMarsh Fund, named after the first Canadian woman cabinet minister. This is a fund that anybody in the party can contribute to nationally. Then, at election time, the money collected is divided equally among the women candidates of the party. I think that this fund is a wonderful model. A number of us reached the spending limit without through fundraising, and thus we happily agreed to give up our share of the fund to other women more in need. The other thing we have, and this is what helped me, is the Victory Fund, which is specific to the second round. If somebody donates $5 to the national party and $5 to the local electoral district party association every month, which means if they donate $10 per month, for the four years between the elections we could mobilize a significant amount. After the last election, I went to all my supporters and all my volunteers and I encouraged them to sign up. Consequently, in the last four years, we raised half of the money that we needed for the entire campaign, simply through these people donating every month. So I think that another effective strategy is relying on many supporters giving small amounts of money every month over a long period of time.

3. How important is the role of social media? Is its impact positive or negative?

I think social media is a wonderful tool. It is a way to bypass traditional media with all their biases and it is a way to get directly to people. It is a tremendous tool, but it is limited because you still need to go where people are, doing door-to-door for example. But in terms of communicating what you are doing, social media is very effective. Social media also allows you to engage people, to get them to communicate on certain issues. It is a great way to promote yourself. Furthermore, it is an easy way to get the attention of the media.  All the TV crews and newspapers are reading twitter, and when they see you have done something interesting, they will reach out to you and cover the story. However, you do need to be careful. As a candidate, you have to see anything that you put on social media as if it is published on the front page of the newspaper. If you do not want to see it on the front page of the newspaper, do not post it. As long as you go by that rule, you should be okay.

4. Do you have more female or male followers? And what about your voters?

Very good question. I have never thought to check. But I can tell you that in Canada, which is I think an exception, whenever a woman is on the ballot, they are elected 50% of the time. That means that the public does not discriminate based on gender. The challenge is in the nomination process, not so much on the election itself. In Canada, getting on the ballot is the barrier.

5. Having women on parliamentary oversight committees could lead to more gender sensitive budgeting. Do you agree?

Absolutely. Beyond that, I think it does not only concern women but you also need people with different life experiences at the table. They will bring different perspectives so it is not about women, but which women. Usually, all the women that are elected are from privileged and wealthy families that are already politically connected. These women would not necessarily have an impact. I will give again the two examples I mentioned earlier, we have a 30-year old woman who used to be a refugee from Afghanistan in cabinet. And given that now the biggest issue globally is the refugee crisis of Syria, she would certainly bring a perspective that others cannot. So it is not just about women, it is really about people coming from different backgrounds and experiences. We just need diversity, and that means diversity in gender, age and religion. I think that the more diversity you have at the decision-making table, the better decisions you will make. This does not mean that the men are not good enough, it just means that they would not even think about certain things because their experiences do not allow them to think in certain ways. The other example I gave is the aboriginal woman Minister of Justice. One of the very first things she initiated as a minister was to launch an enquiry on missing aboriginal women. In Canada, there are about 1200 women who are either missing or murdered. All 1200 are of aboriginal background. There is obviously a huge Human rights issue here, however the previous government treated it as a criminal matter and thus did not really address the issue. I think that we would have dealt with this as a government anyway, but her perspective and the priorities that she brings based on her personal experiences are absolutely critical.

6. Do you have objectives you would like to achieve during your time in office?

For the last twelve years, a woman MP has held a weekly phone call across the country with women who wanted to run for office. I was on that phone call for a year before the first election and then I stayed on that call pretty much every week during the four years in between the two last elections. I was able to talk to women across the country who were running or thinking of running. It was very helpful to be connected to an MP already in office so if we ever needed information or advice, she was there to give answers. This woman is now a cabinet minister and due to her new constraining responsibilities, she can no longer pursue this initiative. I am happy to announce that I agreed to take it over as a new MP. I will be reaching out every Sunday to deceived female candidates from my party to encourage them to run again next time. I benefitted from these calls in the past and now I would like to continue it so more women can benefit. I am also very active with my party’s women caucus. Currently there is no inter-party women caucus in parliament, and my plan is to see if we can start building bridges among the different parties’ women caucuses to create a bigger women coalition. There is also other initiatives, for example we have Equal Voice, which is a multi-party organization that encourages women to run that is present in university campuses. I have always done trainings for young women and I am going to continue doing that with students and young women. Lastly, our party committed to electoral reform, especially on the nomination system because of its negative impact on women. I would like to contribute to a different electoral system that would be much better for women participation.