author of "The Highest Glass Ceiling: Women’s Quest for the American Presidency" 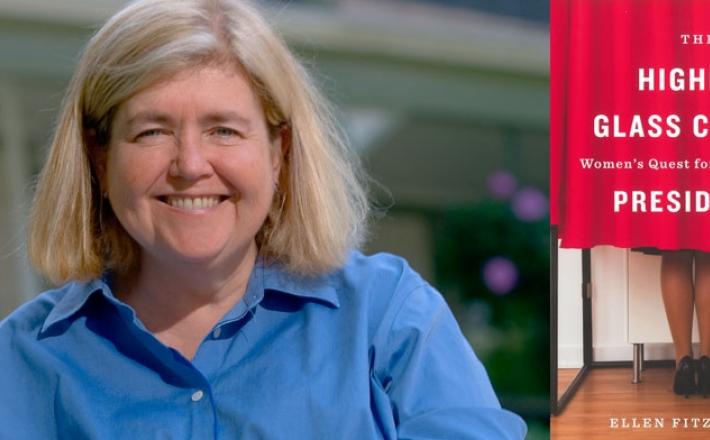 America has seen a strong female candidate in two of the last three presidential elections. In fact, in some eyes, a woman’s name on the ballot might now seem almost commonplace. What (and who) happened to make this possible? Historian Ellen Fitzpatrick, author of “The Highest Glass Ceiling: Women’s Quest for the American Presidency,” weighs in.

FM: Given the upcoming election, your book seems timely. But you’ve written a number of books about women in history. What prompted your decision to write about women, and why women aspiring to the White House?

EF: I have studied both women’s history and political history, and what I have observed is that very few women historians are interested in the history of the presidency, for obvious reasons. And most presidential historians are not interested in women’s history, for obvious reasons. Most [presidential historians] are men, and there are no women [Presidents]. So this was a topic that had fallen between my two areas of interest, and I thought that this would be an opportunity to try to bring them together.

I didn’t know when I decided to write the book whether Hillary Clinton was going to run or not… I figured that probably there would be a woman candidate this time, but it might not be Hillary.

FM: A lot has been said about the role of gender in criticisms of Clinton and other female politicians. How did gender affect the campaigns of the women in your book? How is it influencing Clinton’s campaign?

EF: All of them had to deal with the prevailing ideas about gender from their different historical moments. Victoria Woodhull [the first female presidential candidate, who ran in 1872] faced very traditional ideas… which she violated in almost every respect. She was divorced, she was very radical, she was a free love advocate…. She was depicted as ‘lacking virtue’… and that led to one of the great celebrated sex scandals of the late 19th century.

Shirley Chisholm [the first African American major-party candidate of any gender, who ran in 1972] had a very devoted husband. She would be outraged when people would say to her, “Your husband must be a wimp. How can he be married to a woman running for President or Congresswoman?” She would say, “No, he’s very manly. You don’t know what he’s like.” But in fact he did devote himself to promoting her political career, and they did have a very traditional marriage in that respect.

None of these women could escape the gender stereotypes of their time, but all of them challenged them through their run for the presidency. At the same time, they had to demonstrate that they were upstanding, respectable women, even though they were doing something completely nontraditional that violated prevailing gender norms.

FM: You’ve talked about the enormous influence of Betty Friedan’s 1963 book, “The Feminine Mystique.” How did second-wave feminism influence the possibility of a female president? Did the women of your book think of themselves as feminists?

EF: I’ve had people say to me, “How can you consider these people feminists?” It was before the feminist movement. But yes, they were, all three.

Margaret Chase Smith [a woman who ran for the Republican nomination in 1964] denied that she was a feminist… She supported efforts to progress women’s equality… [and] she did a lot for women in her Congressional career. She was very interested in women’s issues. But [she was] uncomfortable with the label ‘feminist.’ She didn’t like the association. She didn’t want people to think she was like Gloria Steinem. She was a dignified Republican with pearls.

FM: Has third-wave feminism made it into federal politics? How has the role of feminism in politics changed since the eras covered in your book?

EF: The landscape for women has completely changed since the early ’60s…. The number of women in national politics is still miniscule compared to the number of men, but political parties were very much changed by the challenges that feminists, civil rights activists, and radicals made at the end of the ’60s and the early ’70s.

There are pieces in place in the foundation for someone like Hillary Clinton to build on. And no one has put the pieces together better than she has: the money, the patronage, the backing from party elites, the exposure to the public, the admiration.

But—if her husband hadn’t been President, if the country hadn’t come to know her as First Lady, if we hadn’t been through two terms of scandal and recovery, if she hadn’t become admired for standing by her philandering husband…. Her stock soared after he was impeached, because she stayed with him. A lot of feminists thought it was terrible, that she wasn’t a real feminist because she stayed with him… but the average person out there greatly admired her for it.

She blends these traditional and feminist components. She might have been in national public office, but she wouldn’t have gotten 18 million votes for president, if she didn’t have… all those other bits that she put together. That’s my view, anyway, and I’m sticking to it.