‘Any woman in her right mind would not go into politics. You are completely dehumanised

‘Any woman in her right mind would not go into politics. You are completely dehumanised 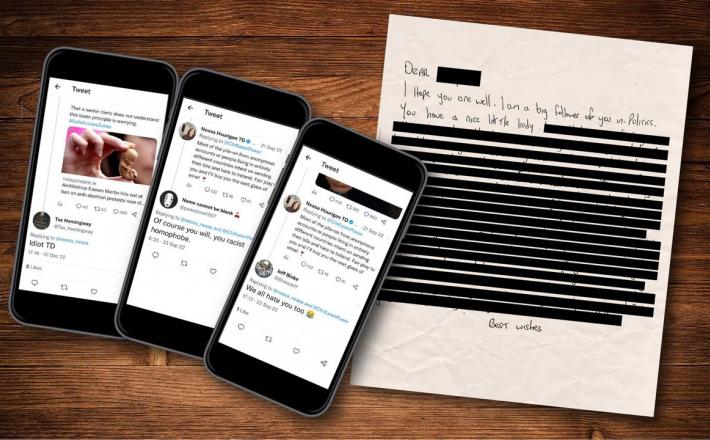 Five public representatives describe a world of threats, insults and fear, driving one to conclude: ‘I’ve gone past the stage of recommending politics to people’

A bullet shell left at the back door. A long lens over the garden wall. A letter that says: “you have a nice little body,” with an extremely detailed description of the sexual acts the author wants to perform. A letter that says: “I have a picture of you stuck on my bedroom wall” which is defiled. A voice note sent on WhatsApp that says: “I’m going to piss on you.” Pictures of body parts: male, female, animals. Online messages that say: “you are a bitch, a tramp, a whore.” A nine-year campaign of online abuse.

Shockingly, some of the above is what one female TD describes as “the usual”.

Earlier this month Joseph Baldwin, from Gort in Galway, threw two bags of cow faeces at Fianna Fáil Minister of State Anne Rabbitte and Fine Gael TD Ciaran Cannon at a public meeting. The incident shone a light on an issue that some politicians are reluctant to talk about, namely their own safety.

This reluctance is most pronounced among female TDs and Senators. The reason for this is that, by and large, they are on the receiving end of the vilest and most distressing abuse and threats.

Five prominent women politicians, well known to the public on air and in the Dáil and Seanad, spoke to The Irish Times about the full extent of what they are dealing with.

Click here to read the full article published by The Irish Times on 14 January 2023.