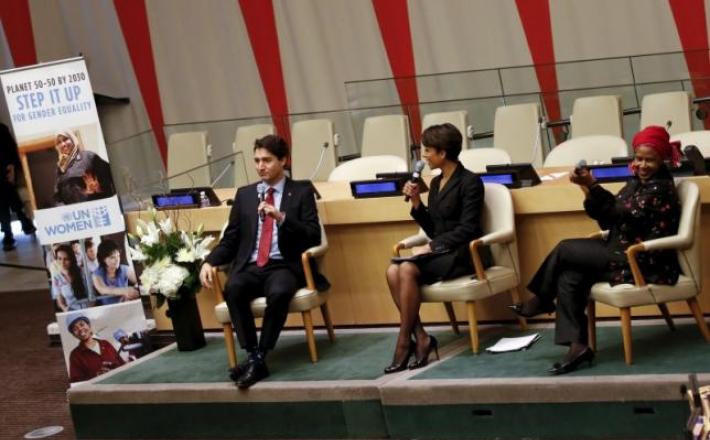 During a High-level event on March 16, 2016 on how to achieve gender equality during the annual Commission on the Status of Women (CSW) at the United Nations Headquarters, the Prime Minister of Canada Justin Trudeau and the Executive Director of UN Women Ms. Mlambo-Ngcuka highlighted that the efforts to reach gender equality need to involve everyone in society, not just women. Ms. Mlambo-Ngcuka said collaboration between UN Women and Prime Ministers like Canada’s could help more women access leadership positions. Today, only 22 per cent of the world’s parliamentarians are women.

“Those who have authority and power especially, they must lead from the front. The Prime Minister [Justin Trudeau] was able to appoint a 50-50 cabinet. It’s not in his power to have a Parliament that is representative but he has authority to appoint a cabinet that is representative. So, leaders must use the authority that they have because you’re there for a reason, to make the world better, and UN Women insists on that” she said.

“I’m going to keep saying loud and clearly that I am a feminist until it is met with a shrug,” he exclaimed. “Why [is it that] every time I say I’m a feminist the ‘twitterverse’ explodes and news and media pick it up – it shouldn’t be something that creates a reaction. It simply is saying I believe in the equality of men and women, and I believe we still have an awful lot of work to do to get there.” Mr. Trudeau told the audience. He also said that one of the reasons why people have been paying attention to him is because he’s just one of the first leaders from a younger generation to take the stage.

Click here to watch the event and here for more information.