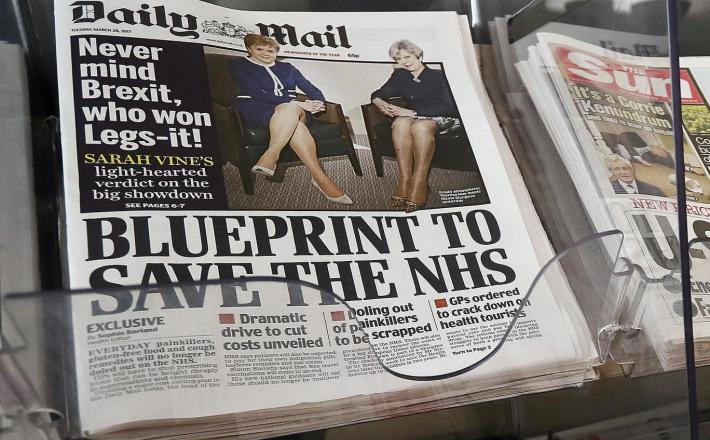 Obsession with female politicians’ appearance in the media is putting young women off going into politics, a study has revealed, prompting campaigners to call for an end to sexism in political media coverage.

41 per cent of girls aged between nine and 16 think there has been a rise in media sexism in the last six months, while 39 per cent said this has knocked their confidence, according to the new research by Girlguiding, the UK’s leading charity for girls and women.

The charity has launched a campaign encouraging all young women to vote, but has voiced concern that the continual objectification of female politicians and media focus on what politicians look like is side-lining girls from the political conversation.

It cited the infamous “Legs-it” headline – referring to a meeting between Theresa May and Nicola Sturgeon - and “constant editorial features detailing politicians’ outfits” as clear examples of sexist attitudes.

A youth panel member of the charity from Northern Ireland, Emma Taggart, 16, said: “Sexist depictions of female politicians in the media put me off engaging with politics. Focusing on a politician’s appearance instead of want she has to say sends the message that even women in the most powerful roles in the country aren’t taken seriously.”

Responding to the findings, Sophie Walker, leader of the Women's Equality Party, told The Independent: "As a mother of two daughters, it really upsets me that media sexism is having a direct impact on the self-confidence of girls and young women.

“The Women's Equality Party has made fair treatment of women in the media a core objective because we understand that the press has enormous power to shape the culture we live in.

In light of the survey results, Girlguiding has called for the media to stop talking about politicians’ appearances and focus on their “opinions not pins”, and to include young women in debates and ensure their views are represented in political coverage.

It also urged the press to recognise the diversity of young women’s voices including those who are too young to vote now, but will still be affected by the decisions of the next government.

Click here to read the full article published by the Independent on 4 May 2017.