No party to violence: Analyzing violence against women in political parties

No party to violence: Analyzing violence against women in political parties 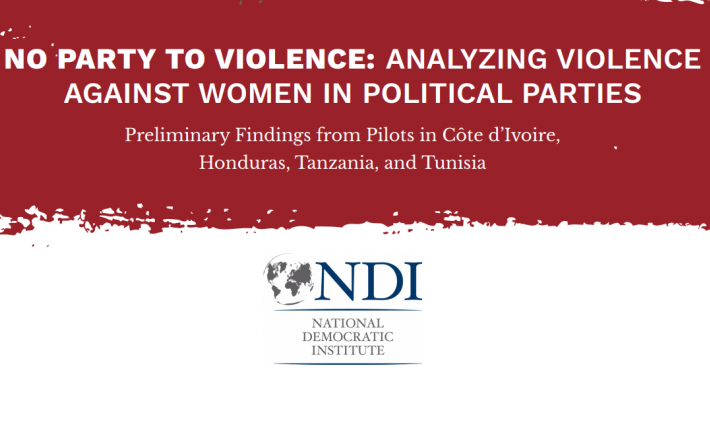 Taking the opportunity provided by its 2017 review of political party strengthening, "Reflect, Reform, Re-engage: A Blueprint for 21st Century Parties," NDI has revised its long-standing Win With Women political party assessment tool, including by adding guidance on measuring levels of and dealing with the violence that women members face within their parties. The No Party to Violence: Political Party Assessment includes survey, focus group and in-depth interview tools to be used with women and men in the leadership and membership of parties in order to develop action plans to root out the violence targeting women within their own political party.

Over the last year, this new approach has been piloted with a number of the larger political parties and civil society in Côte d’Ivoire, Honduras, Tanzania and Tunisia. The outcomes from this piloting represent the first assessment of women party members’ experiences of violence within political parties, thus providing important new insights on the phenomenon, which has never been systematically studied previously. It offers a unique cross-country analysis of the current understandings and perceptions of men and women party members around the types, levels, and impact of violence against women within these institutions. This important information is being used to create party- and country-specific recommendations to improve awareness, action and accountability to end violence against women within political parties, thereby strengthening women’s membership and their roles on a basis of enhanced equality. The piloting process has also created a safe space for multi-party dialogue in ways which have not exposed any party to the political risk of negative commentary from the issue being aired in public and/or used by their competitors.

This report provides a preliminary analysis of the topline findings from the surveys of men and women party members in the four countries. This briefing will be followed by an analysis of the accompanying focus group and in-depth interviews that were carried out as part of the No Party to Violence: Political Party Assessment pilots.