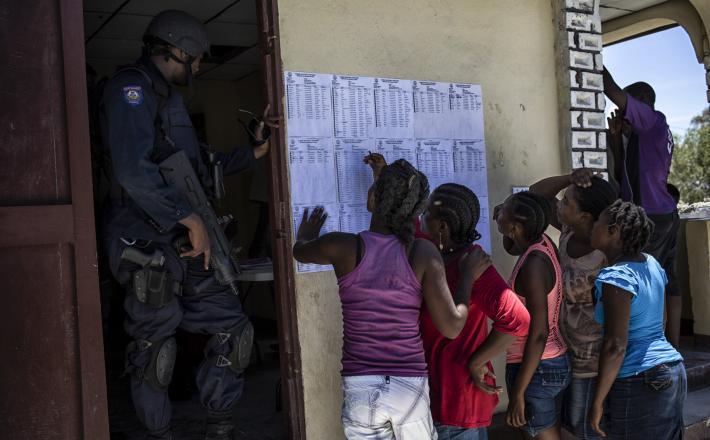 In a series of 16 blogs for the 16 Days of Activism against Gender-Based Violence, UN Women’s Executive Director Phumzile Mlambo-Ngcuka addresses 16 ways to end violence against women.

A critical part of UN Women’s work in ending violence against women and girls is supporting change in discriminatory laws and policies. In fighting for policies that empower women and prevent and eliminate gender-based violence, we’ve worked to ensure more women have access to policymaking positions, political leadership and other seats of power. But the path towards election is far from easy, and championing women’s leadership in politics can bring severe repercussions.

Targeted attacks deter women from running for office or may force them to drop out during their campaign, or after being elected. Women who seek to exercise their rights to vote can find themselves the target of violence, and intimidation can result in fewer women casting their ballots.

In countries with already low rates of women in politics, violence — or the threat of it -can severely discourage women from entering politics or taking part in elections. Whether because their participation in elections threatens the dominance of male power, or whether a form of punishment for not conforming to gender roles assigned to women, violence is always one of the most serious obstacles to the free exercise of political rights and leads to a democratic deficit.

While every act of violence against women is shocking, some that have gained international prominence include the assassination of Salwa Bugaighis, a women’s movement leader in Libya, who was assassinated when she went to vote in the country’s general elections in 2014, and Juana Quispe, an elected Councilor in Bolivia who suffered ill-treatment by members of her council and was murdered in 2012 — leading to the passage of the Law against Harassment and Political Violence towards Women (№243). Women candidates in many countries face intimidation, violence and harassment contesting elections, as was the case in Kenya’s 2017 elections, where women across the political spectrum complained of harassment.

Democracy is not democracy while women in politics experience violence. Women must be free to vote, campaign and hold political office free from violent retribution. To remedy this, UN Women and UNDP are releasing a new publication on the subject, Preventing Violence against Women in Elections: A Programming Guide, which sheds light on the scourge of violence against women in elections and presents options for programming responses to prevent it. It showcases several innovative prevention and response measures being tested.

All governments should be democratic, accountable and fair. Let’s start by making sure that women can participate freely, fairly and safely in elections and politics, so we can attain more balanced societies that are better able to gain peace and prosperity.

For more information on this topic, visit the iKNOW Politics Facebook page at 10 a.m. EST on Wednesday, 29 November for a Facebook Live Panel on Violence Against Women in Politics.