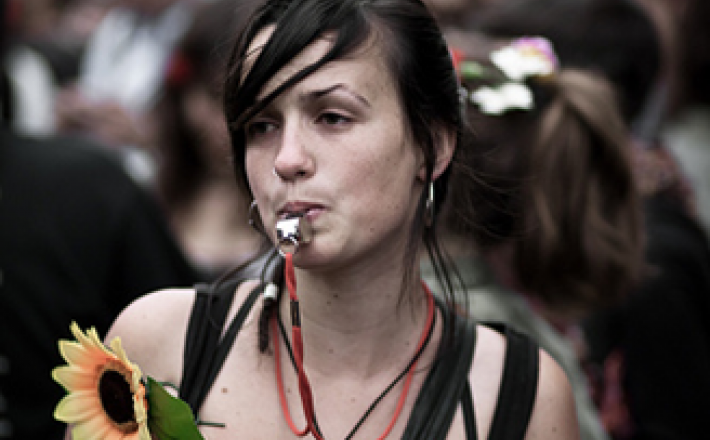 iKNOW Politics hosted a discussion on the political participation of youth and their capacity to empower women during the period between July 21st and September 1st 2014. The discussion received feedback from several different countries including Belgium, Britain, Bulgaria, Ethiopia, Fiji, France, England, USA, China, Lebanon, Malaysia, Netherlands, Suriname and Uganda.

Political institutions have traditionally been created in male dominated societies in which men formulate the rules of the political game.  Although traditional political institutions have undertaken efforts to become more accessible for young people and women, it seems these efforts were not enough to break the hierarchical structure of these institutions. In both north and south, citizens are disappointed with governments, based on concerns of corruption, lack of responsiveness to the needs of the poor and the absence of a sense of connection with elected representatives and bureaucrats. With the flourishing of civil society and new forms of participatory democracy, citizens have forged new paths to representation and activism.  Young people have found a way to have their voices heard, by leading movements such as “Occupy Wall Street”, the “Indignados”, the protests in Tahir Square and many others, where young women have also actively engaged.

•    Could these alternatives pave a way to increased participation of young women in politics?

•     Are women’s concerns better addressed by young people? Are youth more sensitive to discrimination and gender based violence?

The following is a summary based on user comments on this topic. To see the original comments please refer to this link.

Q.1 Could these alternatives pave a way to increased participation of young women in politics?

Formal political institutions are overwhelmingly male dominated and only function by granting tokens and displays good-will while assuring that their powerbase remains uninterrupted. This is why civil society – and particularly youth and women- have sought alternative means to demand rights and action on social, political, economic and cultural problems. With the flourishing of new forms of participatory democracy, "normal" citizens have created new "lobbies" and "networks" to be able to change the status quo imposed by the political elite. These alternatives, however, are not necessarily aimed at entering politics or creating space for groups (women, youth, elderly, minorities, etc.) to become part of the masculine powerbase and do not call for long-term political positioning of activists in formal politics. They are more often aimed at confrontation and the rallying of allies to advance specific causes. The positive outcome of alternative engagement is increased awareness levels of political issues with subsequent political engagement/participation, albeit not necessarily from within the formal political structure.

So while these alternatives could pave the way to increase women’s participation in politics (with the precondition that women are educated and economically enabled), care must be taken to ensure that these informal methods of engagement translate to more participation in decision making and election to offices. In a thesis by one of our members, she holds that while participatory democracy is increasing with the help of new tools and mediums such as social media, online networks and online advocacy, the core problem is that this activism often remains confined in the "virtual sphere". Political institutions need people on the ground to work on changing them from the inside not only through virtual platforms. Activism on the ground combined with virtual online activism, that creates networks and communities with common interest, will lend young people and women a heard voice that can bring about change.

Admittedly, legislative assemblies and political parties are, alongside other bureaucratic institutions, gendered. The configuration of state hierarchies enables men to predominate the higher echelons thus enabling them to wield positional authority.  Male dominance of positions of power and the entrenchment of a culture hostile to women (that is exuded in both the formal and informal channels) only serves to relegate the role of women. Therefore the pressing question is “Can young people break the socio-cultural and institutional barriers for women in politics?” The answer to this question is a yes.

However, at the outset, it is important to note that young people are not a homogenous group anywhere. Differences in locality, region, culture, religion, urban-rural divide, rich-poor divide, etc, all add to their diversity and the different ways they deal with issues within their contexts. Not all young people are aware of the importance of women’s inclusion, and many of them are exposed to stereotypical knowledge on women's issues, and issues of social justice, development and inclusion. Yet, they remain a major driving force for change if they are well informed and well fed with knowledge and awareness.

Youth are likely to learn from imitation and apprenticeship. According to a White House Project Education Fund study, young women and men involved in politics were found to have been previously involved in community projects (Ford, 2002) or born in families in which civic behavior was modeled by their parents. The men and women in the study who showed interest in running for office were also found to have had some apprentice leadership opportunity at school. The research therefore emphasizes that providing young girls with mentors, role models and avenues of practicing politics, before transitioning into adulthood has a positive impact on their interest in politics as well as their ambition for office.

Young people are doubtlessly a major force that drives progress and changes circumstances which they consider unfair. Their capacity to bring about change has been demonstrated repeatedly throughout history. Young People [men and women] have in the majority of past societies [France during the revolution; the American Colonies when seeking independence from England; China during the long march prior to the communist insurgency] generated and inspired social and political change. More recent examples include the 2011 uprisings in the Middle East and the 2013 civil protests in Bulgaria that were organized in Sofia mainly by young people against corruption and the connection between politics and mafia. Among the leaders of these protests there were many young women and some of them became faces of various civil society organizations. Currently these organizations participate in political discussions and even propose legislative changes.

However, one of our members, who has worked with youth, observed that there is also a dose of selfishness and a powerful notion of individualism among them. So while they can most definitely contribute to breaking cultural barriers for women’s political participation, it is important to raise their consciousness and interest in this topic starting in schools and universities. Young people must see the importance of women’s political participation and the equal distribution of power. If not, this issue will not be of interest to them. If youth are taught about the importance of gender equality in political institutions, their long term civic and social engagement can bridge the divide between male and female political participation. But it is crucial that they learn from the past where groups tried to change the masculine, patronizing political structure and become part of the decision making process and how enduring these struggles were. They also require knowledge of how politics operate at all levels and the lengthiness of processes of change. Young people often focus on issues that do not go to the level of challenging existing structures of political institutions. For example when students demand better education or trade related regulations to stop the influx of cheap products that push local producers out of the market, the political outcomes are only at the level of policy change or reforms. They are not aimed to change institutionalized masculine political structures.

Q.3 Are women’s concerns better addressed by young people? Are youth more sensitive to discrimination and gender based violence?

Again, the lack of homogeneity among ‘youth’ must be noted. It appears that gender-based violence continues in many societies even among youth. However, one notable change is the rate of reporting of these incidents particularly among female youth who are more empowered to voice their concerns.

Some of our members argue that women’s concerns are not necessarily better addressed by any particular group, including young people. In addition to the fact that many young people (including young women in western societies) are not aware of existing gender discrimination or the history of the women’s rights movements. They contend that the best fighters for women’s emancipation, freedom and rights are now aging and that only a negligible portion of youth are involved nowadays in this struggle. It is not that the older generation failed to hand over the torch to the next generation, it is more that because of their grand achievements in their times there exists a misconception at present among young people that women’s emancipation is a done issue and that women are equal at all levels. This misperception diverts the focus of young people away from women’s rights concerns to concerns that are bring visible impacts in a short period of time (such as the struggle against Monsanto or Occupy Wall Street). This is regrettable because women fail to realize that their rights and gains should not be taken for granted and that they remain in patriarchal control. It could also be that women in many countries realize that the fight to change patriarchal structures in favour of gender equality is unrewarding and endless. This may turn their attention to issues with more direct outputs and outcomes. Young people often want to see the outcome of their action. That gives them a boost. Struggling for women’s rights is not among these.

We would like to sincerely thank all participants for contributing to this forum.