Summary of the e-Discussion "The implementation of UNSCR 1325 in the Arab States: taking stock and moving forward"

Summary of the e-Discussion "The implementation of UNSCR 1325 in the Arab States: taking stock and moving forward" 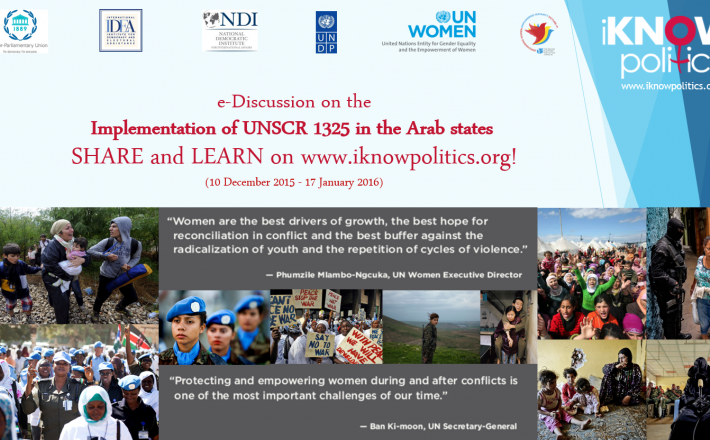 The e-discussion was hosted on the iKNOW Politics online platform and received eleven contributions from international organizations and regional organizations representatives, leaders, policy specialists and women rights activist from the Arab region. One comment was authored by the iKNOW Politics team, based on the knowledge gathered at a webinar organized by the Women’s International League for Peace and Freedom (WILPF).

The experiences, practices and recommendations of each response were consolidated by the Team and the below summary highlights the key conclusions of this e-Discussion.

Drawing on and confirming the findings of the United Nations Global Study on the implementation of UNSCR 1325 “Preventing Conflict, Transforming Justice, Securing the Peace”, all respondents agree on the pressing need to advance the agenda on Women, Peace and Security (WPS) in the Arab region. All contributions drew attention to the complexity of the conflicts that are currently unfolding in the region and emphasized the benefits that can be brought about when women are fully included in peace processes. When women participate, they help shift dynamics and bring with them particular leadership qualities, such as consensus building, public debate, and a sense of the imperative to conclude talks and implement agreements. These elements are paramount for peace negotiations to be meaningful and lasting. Research has shown that women’s involvement in peace processes leads to better outcomes. The Global Study reports that when women participate “a 20 per cent increase in the probability of a peace agreement lasting two years. This percentage increases over time, with a 35 per cent increase in the probability of a peace agreement lasting 15 years”. A study of the Graduate Institute of Geneva shows that peace agreements were more likely to be reached in cases where women’s groups were able to exercise a strong influence on the negotiation process, and that these agreements were more likely to be implemented. Furthermore, several of the countries with the highest [political] representation of women globally are also those emerging from conflict, including Afghanistan, Angola, Burundi, Croatia, Iraq, Mozambique, Namibia, Nepal, Rwanda, Serbia and South Sudan. The respondents made clear that women’s participation and leadership have considerable benefits in peace negotiations and have spill-overs that improve the advancement of gender-sensitive legislations and actions. Good examples from other countries were cited:

“In Burundi, women succeeded in including provisions on freedom of marriage and the right to choose one’s partner into the peace agreement. In Guatemala, women’s organizations coordinated with the woman representative at the table to introduce commitments to classify sexual harassment as a new criminal offence and establish an office for indigenous women’s rights”.

In the Arab region, only three countries have established National Actions Plans (NAP) [1] for the implementation of UNSCR 1325. A successful example is Iraq, which has adopted its NAP in February 2014. The other two, Palestine and Jordan, have drafted their respective NAPs but did not officially adopt them.  As expressed by the Jordanian National Commission for Women (JNCW), its adoption was compromised by the limited awareness efforts and a lack of local engagement in the drafting process. The draft remained under review by the Government of Jordan for three years. Since 2015, the JNCW has been working with UN Women Jordan to implement UNSCR 1325 through the development and adoption of a new NAP. At the regional level, the League of Arab States (LAS) put forward a Regional Strategy on advancing the WPS agenda, including a regional action plan for the implementation of all UNSC resolutions related to this agenda. The LAS is the first regional organization to take the initiative of such a regional strategy and action plan.

All respondents agree that the implementation of UNSCR 1325 is a difficult process, as one respondent highlighted:

“The main challenge faced is primarily attitudinal – if country X is not in conflict, it does not need a NAP.  The perception that 1325 applies only to countries in conflict is slowly changing, but requires continued advocacy… Another major challenge is the traditional (non)relationship between government and civil society, and more specifically engagement with women as equal and valued representatives of civil society.”

The difficulties faced by civil society organizations that wish to engage in the implementation of the agenda was brought up by several respondents. In Iraq for example, despite the multi-sectoral working group set up within the framework of the NAP, the government did not include enough consultations with it when revising the plan. This resulted in the dismissal of amendments and the deletion of provisions that had been put forward by the group. In addition to this:

Another major challenge mentioned by numerous respondents is the lack of funding to support the full implementation of the NAPs. It was noted that only few NAPs have dedicated budgets and even fewer receive funding directly from the government in question. Parliaments were found to be vital bodies in delivering transitional justice, as proven in the examples of Bosnia, Libya, Kosovo and Croatia where parliaments have enabled restitution for women victims of conflict (particularly of gender-based and sexual violence). The role of male MPs was mentioned as important to further promote the WPS agenda among MPs:

“What is essential is that there are both men and women MPs willing to promote the agenda.  This is not just a gender agenda, but a national human rights agenda that must be owned by all duty-bearers.  Particularly in a patriarchal society, it is critical to have male as well as female champions of the cause, as women in government are sometimes place-holders for men, rather than independent actors”.

Three proposals were suggested for the Parliaments in the Arab region:

Two parliamentary caucuses were recently launched by the Arab States’ Regional Parliament and the Algerian National Parliament. Both have put UNSCR 1325 at the core of their operational by-laws and yearly action plans that fundamentally work towards achieving gender equality.

For any NAP to reach its full potential in terms of implementation, proper strategies and effective monitoring and evaluation mechanisms need to be put in place. Emphasis was put on the actors responsible for the monitoring and the mechanisms in place to share the findings. Good practices were observed when civil society was engaged in the monitoring process to produce shadow reports. This leads to greater transparency and effectiveness of the agenda’s implementation. It was suggested to place the reports within the public domain and to link this process to the reports on gender-responsive budgeting. Such a mechanism facilitates to access the government’s adherence to its gender commitments. Respondents from Jordan also put emphasis on the need to draw on expertise and technical support in the monitoring process. For example, JNCW and UN Women Jordan worked together to bring to the table various stakeholders. The practices put in place for the future Jordanian NAP read as follows:

Other good practices include the above-mentioned LAS Regional Strategy. It was identified as a positive initiative to encourage other regional organizations to recognize the regional impact of conflict and to identify how each country can contribute to mitigate its impacts. The creation of such platforms are thus important steps towards fostering regional dialogue and partnership building. However, it remains to be seen if a model such as the one initiated by the LAS, will have positive effects on advancing the WPS agenda and more generally on women’s participation.

Partnership building, especially with civil society, is at the core of the successful implementation of the WPS agenda. Respondents agreed that civil society and women’s organizations have played a key role in pushing the agenda, promoting the role of women in peace processes and raising awareness about the impact of conflict on women and girls in the Arab region:

“We worked with national counterparties and CSOs to align their forces and lobbying efforts to increase women’s representation in peace negotiations, political dialogues, constitutions’ development and governments following peace agreements. For example, in Libya six women were members in the Constitution Development Assembly and a women’s track was introduced to the formal political dialogue composed of 25 active women.  In addition, a Syrian Women’s Initiative (SWI), composed of 40 women activists was created  (representing different ethnicities, backgrounds, geographical locations, political affiliations, etc.). This SWI managed to form a parallel track to the official political dialogue and created a vivid space for women’s voices, which leveraged their lobbying power.”

It is crucial to bring together those directly involved, for example through platforms that enable all stakeholders to meet and make decisions together as these allow for experience and knowledge-sharing while ensuring relevance and practicality. For example, CSOs in Iraq conducted several initiatives to reach the various religious and ethnic groups of both sexes and promote the principles of peaceful coexistence and tolerance in the areas experiencing high levels of sectarian violence. In regards to capacity building, many Iraqi CSOs have organized trainings in the fields of conflict resolution, dialogue and development. There is no doubt that civil society activism has vast impact on the society. For instance, women’s movements in Iraq successfully lobbied for the adoption in the constitution of a quota system which ensures the participation of women by no less than 25%. Another example is that of the regional office of UN Women in Cairo, which organized a two-day capacity building workshop that gathered representatives of women machineries across the MENA region. Training on how to draft applicable, cost-effective and coordinated NAPs was provided. Furthermore, it was highlighted that a full understanding of the national needs and context related to the WPS agenda, is a key element to strengthen capacities, awareness-raising and lobbying. With a view to increase understanding of local challenges to the WPS agenda, plans to address the gender dimension of radicalization, as well as consultations with refugees are currently being developed.

[1] To read more on National Action Plans and search by country, please access Women’s International League for Peace and Freedom.