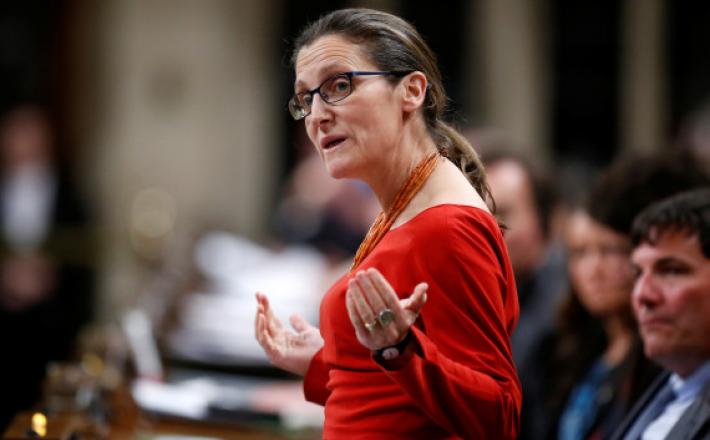 In a country that prides itself in its gender-equal cabinet, the question of whether or not Parliament Hill is a safe space for women is rarely discussed. From hateful and misogynistic comments to sexual assault, women in Canadian politics continue to be targets of violence at various stages of their careers.

Gender-based sexual violence continues to impede on women's involvement, undermining their role in Canadian politics. According to the International Knowledge Network of Women in Politics report, violence against women in politics refers to "physical, psychological or sexual aggressions taken to shorten, suspend, impede or restrict the exercise of their office, or force a woman to make decisions against her will." Let's take a look at some of the ways violence against women manifests itself in Canadian politics.

Gender-based harassment is most patently revealed through heckling and sexually motivated comments in politics. In 2014, current Minister of International Trade Chrystia Freeland was told to use her "big girl voice" as she was struggling to get her message across amid heckling from the opposition; five years earlier, Toronto City Councilor Karen Stintz was criticized for her "shrill" voice, compelling her to take public-speaking lessons. These criticisms do more than squander time that could be spent forming policy, they reinforce harmful stereotypes and discredit women for something as negligible as their vocal prowess.

In a report conducted by Samara in 2015, one MP said "[heckling] makes me aware that people are often trying to silence me." The same study concluded roughly 20 per cent of the MPs reported pulling back on debate in the House of Commons because of heckling, most of whom were women. Anecdotes like these are a mere drop in the ocean for women who feel barred from the political process in Canada.

Unfortunately, the buck does not stop at heckling. Despite numerous high-profile cases and government initiatives designed to protect women, sexual assault is the only violent crime in Canada that is not declining, and occurs in political spaces as well.

The year 2014 emphasized this as two Liberal MPs, Scott Andrews and Massimo Pacetti, were suspended pending various sexual assault allegations made by two female NDP MPs. Both Andrews and Pacetti were allowed to sit as independent MPs for the remainder of Parliament before later being permanently expelled from the Liberal caucus.

Our failure to adequately address rape and sexual assault discourages women from speaking up about their experiences. In the same year, former deputy prime minister Sheila Copps spoke up about her personal accounts of rape and sexual assault in politics during her time as an MP more than 30 years ago. It took the resurgence of a dialogue about sexual violence in politics more than 30 years later for Copps to publicly share her story.

Sexual violence impacts women at all stages of their political careers.

Cyber-violence, too, has proven to have an impact on women entering the political arena.

In November 2016, MLA Sandra Jansen stood in the Alberta legislature and read comments she had received online in an attempt to bring attention to the difficulties women in politics face. One such commenter wrote, "now you have two blonde bimbos in a party that is clueless." Another called her a "dumb broad," adding that the NDP was a good place for her to be "with the rest of the queers."

A week before that, 337 young women took their seats in the House of Commons during the Daughters of the Vote (DOV) conference to celebrate 100 years of white women's suffrage and to set the agenda for the next 100 years on International Women's Day. Arezoo Najibzadeh, a DOV delegate, chose to leave her seat empty as a symbol of what she said was "the countless Canadian women who, as a result of sexual and gender-based violence, have not been able to realize their potential to play a meaningful role in the political sphere."

These powerful acts of protest are drawing back the curtain, exposing the everyday violence faced by women in Canadian politics, but we need all hands on deck, as Nanaimo-Ladysmith MP Sheila Malcolmson said in her recognition of Najibzadeh's empty seat.

Mutual respect is a vital component of debate, and the true test of a great argument is through the measure of civility between even the most impassioned political adversaries. In order to make legislatures a safe space for women, leaders and political parties must actively condemn gender-based sexual violence against women in politics and create effective mechanisms for addressing the issues.

We need our elected representatives to both actively condemn sexual violence and commit to a political atmosphere of consent and respect. We must be aware of the diversity of our politicians and be proactive in creating a political climate that embraces a variety of identities. We need policies and services that confront the specific forms of violence challenging women on and off legislatures, and we need all political actors to contribute to a safer space for women in politics.