Giving a voice to women in Tunisia

Giving a voice to women in Tunisia 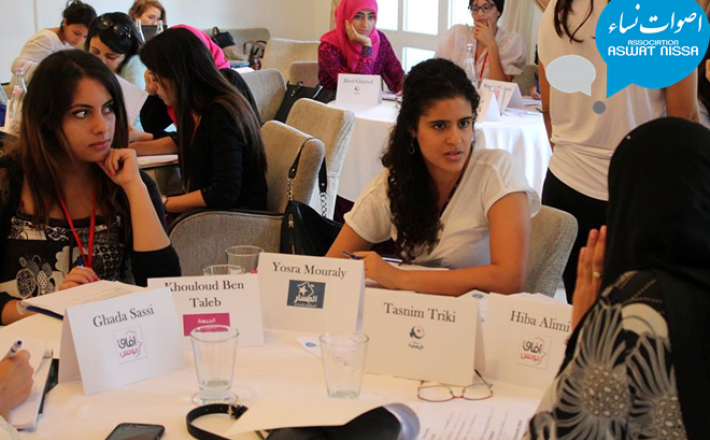 Earlier this month, the Tunisian organisation Aswat Nissa (the voice of women) launched their biggest project yet; the Women Political Academy 2015-2016. In partnership with Oxfam, the Academy aims to train 60 women aged 18 to 35 that are already active in political parties to help them pursue a political career and access decision-making positions within their parties and for the next local elections.

The program is organised under three main units; Leadership and Communication, Public policies, and Electoral campaign. Every training will be given by imminent Tunisian and international experts, and has been specifically designed to give a thorough understanding of the topic studied and to help the participants master the skills related to each topic. The long-term objective is to enable the participants to become leaders for the new generation of Tunisian women as well as to advocate for women’s rights and interests within their own political party.

This is not a small task, and certainly not one without obstacles.

As they enter the third edition of this project, the team behind Aswat Nissa reflects on the challenges they had to overcome. Sadly, on that aspect, there is still a lot of work to be done.

The reality is that many prejudice and stereotypes regarding the role of women still linger in the Tunisian society, in which the gender-based role distribution assigns to women a daily workload superior to 40% the one assigned to men [1]. This burden not only limits the professional initiatives a wife or mother can take, but also the opportunities for advancement that could be made available for any female members in political parties, as qualified as they may be.

The range of these limitations relies on the willingness of the parties to fully include women in their decision-making bodies, but in that regard, there is hope. More and more, the political parties acknowledge the importance of the work accomplished by Aswat Nissa, as they see how competent and valuable their female members can be, and how important this project is for the next generation of political leaders.

Indeed, the independent evaluation of the last project shows that the candidates have significantly improved their political knowledge and capacities, particularly in terms of electoral communication and gender issues. Their leadership and self-confidence have also been greatly improved, which resulted in an increase of the initiatives taken by the candidates within their communities and their political parties. Moreover, at least 80% of the candidates declare they put their newly acquired skills into practice, whether in women’s assemblies, political meetings, local councils, or simply by passing it on to their colleagues within their parties.

Therefore, a relationship based on mutual trust and respect has been built between Aswat Nissa and the various Tunisian political parties over the years, allowing them to work hand in hand to create more opportunities for women.

In conclusion, there is still a lot to be done to reach full gender equality, especially in politics, but Tunisian women appear more eager than ever to close the gap, and Aswat Nissa takes them one step closer.