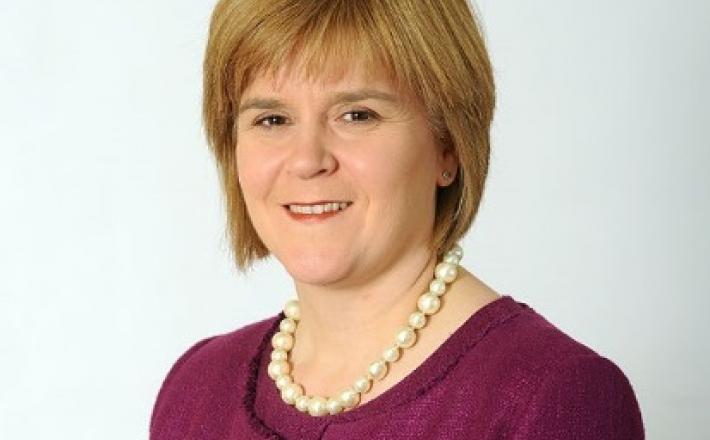 by Lucile Huguet Scotland didn’t get enough Yes to become independent from England. However, the country is at a real turning point of its history. Scotland got its first female politician elected as head of the country. As we know, the No vote was predominant at the last referendum where people were asked if they wanted Scotland to remain part of the UK or not. As Scotland was trying to recover from its initial shock/surprise from the results, this also signified the premature departure of Alex Salmond, Nicola Sturgeon’s mentor, the SNP’s number one (the National Party of Scotland). Mrs. Sturgeon, number two and who turned 44 this year, got the job that is going to allow her make to some significant changes for her country.  She was born on July 19th 1970 in Irvine, in North Ayshire, in Scotland. She went to law school at the University of Glasgow where she got her law degree and a diploma in legal practice. She worked as a solicitor in Drumchapel, in Glasgow. Her partner, Peter Murell is the executive chief of the SNP. As soon as she got to university, she joined the student branch of the SNP, which launched her activism. However, she states that her commitment dates back further than that as she stood against Margaret Thatcher’s policies when she was 16; she claimed that Thatcher’s policies were destroying any kind of hope for young people in Scotland.  After 15 years of trying to get a seat within Parliament without any success, she finally made it in May 2007. She was elected vice-president of the Party in September 2004 and then became the chief of the Scottish Parliament as Alex Salmond was seated at the House of Commons. During this time she became famous for her fierce opposition to the labour Prime Minister Jack McConnell. On November 14th 2014, following Alex Salmond’s resignation, she was elected leader of the party during the SNP Congress held in Perth. It’s clear at the time that she was likely to become Prime Minister as the SNP held the majority of seats in the House. She is Prime Minister at a key moment in Scotland’s history. The French newspaper Le Monde writes: ‘This Iron Lady with a baby face, is going to dedicate herself to transforming the so-called “Yes” failure into a triumph for the nationalist cause that she has embraced since she was a teenager in every possible way: rebuilding national pride, standing up to the “London supremacy” and it’s two parties, social and environmental changes.’ We have yet to know what her agenda is concerning women in her country but let’s give her some time to adapt to these changes.