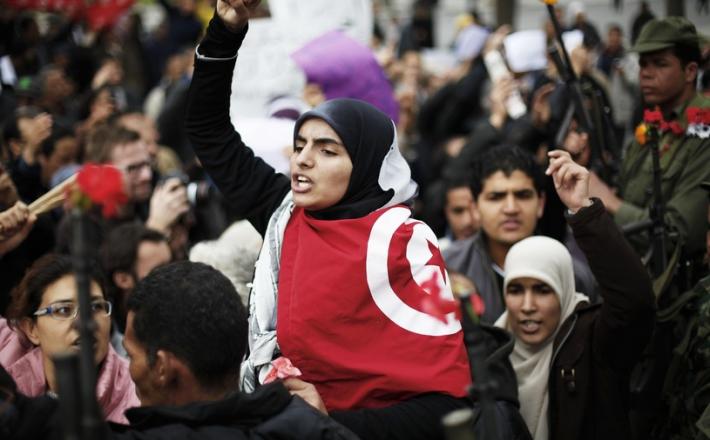 by Sarah Bernolet    A Presidential election will be held in Tunisia on the 23rd of November 2014, a month after the parliamentary election. If necessary, there will be a second round of voting on the 28th of December. This will be the first regular presidential election after the Tunisian Revolution of 2011.   Tunisia is often, rightly, regarded as one of the most progressive Muslim countries towards woman rights. It started more than hundred years ago with a feminist scholar, a man, Tahar Haddad who was convinced that woman rights needed to be extended.    Women have had an increasing role to play in the political life in Tunisia. First, during the uprising in 2011 that ultimately led to the departure of Zine El Abidine Ben Ali on the 14th of January 2011. Women like Radhia Nasraoui, a human rights lawyer and co-founder of the Tunisian association against torture, have become emblematic symbols of the Revolution.     Women also actively participated in the October 2011 National Constituent Assembly (NCA) elections, both as candidates and supporters. The new electoral law requiring gender parity on all political party candidate lists largely encouraged their involvement. This very ambitious law unfortunately failed to deliver as women members represented only 24 percent of NCA seats after the election. However, this number has increased and as of April 2014, 67 women were members of the Assembly.          Among them, there is Maya Jribi, the first woman ever to become the president of a political party in Tunisia in 2006 and only the second in the entire Maghreb. There is Nadia Chaabane, the activist who left her job as a teacher in France to go back to Tunisia and participate to the elections. And there is also, Salma Baccar, who became in the 90s the first woman film director in Tunisia. Despite these noticeable candidates, a study from 2012 showed that many believes current women members of parties appear to hold little real responsibility. Moreover, since the beginning of the Tunisian democratic transition, women have voiced concerns of the reappearance of gender stereotypes, despite the solidarity showed during the 2011 revolution. This feeling could lead to a lack of involvement of women in the next elections.          To avoid that and to increase communication on politics, two NGOs have been created: Sawty and Al Bawsala, both of which have women for president. The idea behind these associations was to keep a link between citizens and political actions. While Sawty focuses more on youth and democratic transition, Al Bawsala plays the role of a platform to build relationships with elected representatives and decision-makers in order to work towards the establishment of good governance practices and political ethics.         And the results are encouraging. Indeed, a few days ago, the State Secretary in charge of women rights, Neila Chaabane announced that 47% of candidates for the parliamentary elections are women and 12% of them will be at the top of the electoral list.  At the presidential level, and despite the difficult context, Kalthoum Kennou could be the answer. Kalthoum Kennou is the only female candidate for the presidential elections, along 26 men. For this former judge and president of the Tunisian Association of Magistracy (MAT), gender equality will be a priority if she is elected. Women in Tunisia are less likely to have access to education or to earn the same salary as a man and she believes that the change has to come from both sides but emphasizes the importance of woman empowerment. In a few months Tunisia could become one of the few countries in the world ruled by a woman.        In parallel, starting January 2015, Laura Baeza, the ambassador of the European Union in Tunisia has announced that 7 millions of euros will be invest to promote gender equality at a national, regional and local level. Hopefully, this project, coupled with an increasing implication of women in politics will help Tunisia to become a stable democracy.