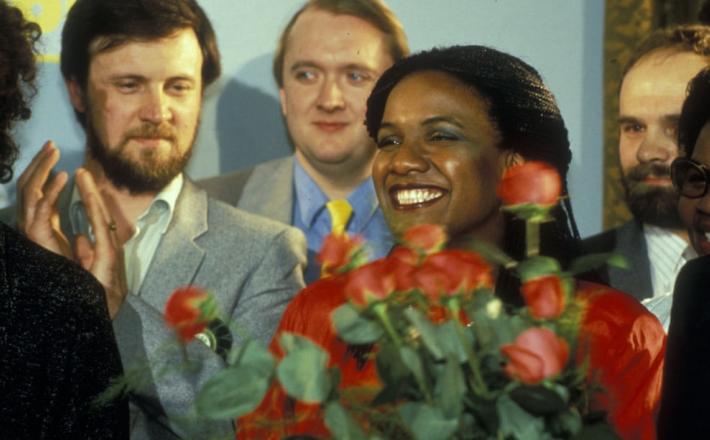 The 1987 election campaign was the first time the Labour party had fielded so many black and Asian candidates. Yet Diane Abbott got the impression that “the national party thought we were an embarrassment”. Certainly, “they offered no support of any kind” and Labour’s party political broadcasts featured practically no black people.

The Tories, on the other hand, saw Abbott as an electoral asset – but not for Labour. Together with Ken Livingstone and Jeremy Corbyn, she featured on their “So this is the new moderate militant-free Labour party” advert. There were two versions: one that featured 24 faces and one that featured six; Abbott was on both. Abbott remembers getting more recognition from the Tory posters than from any Labour material.

Abbott and her team decided to go for broke. Rather than hiding the fact that she was black – the preferred option of the party leadership – Abbott told her designers to put her face front and centre, “so no one could be in any doubt”. The design reflected Abbott’s determination to run as herself, not as an identikit Labour candidate. This was a bold move. Although Hackney had been a safe Labour seat, politicians of all stripes assumed that white voters would not turn out for black candidates, and certainly not for black women. For her opponents, Abbott’s candidacy had put the seat into play. As a result, the fight for Hackney was fierce.

Click here to read the full article published by The Guardian on 29 September 2020.