Increasing women's political participation according to the Beijing Declaration

Increasing women's political participation according to the Beijing Declaration 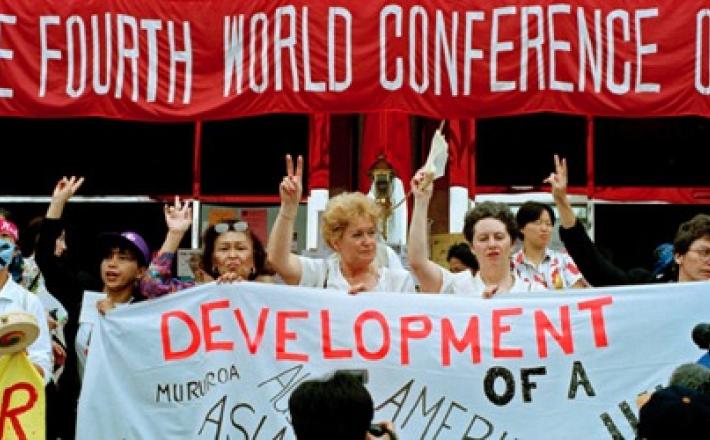 In September 1995 an unprecedented 17,000 participants and 30,000 activists attended the opening of the Fourth World Conference on Women in Beijing, China with a single purpose in mind: the achievement of gender equality and the empowerment of all women, everywhere.  After two weeks of political debate, representatives of 189 governments hammered out commitments that were historic in scope and produced the Beijing Declaration and Platform for Action, a progressive blueprint for advancing women’s rights.The Declaration identified 12 critical areas of concern and outlined actions to be taken in each of these areas in order to create a better world for women. The role of women in power and decision making was among these areas of concern. In calling for ‘gender balance’ in ‘governmental bodies’, ‘public administration entities’ and ‘the judiciary’, two broad objectives were outlined:

Under each of these objectives, a number of actions to be taken by governments and political parties were identified.

Governments were encouraged to take action by:

Actions to be taken by political parties included:

·  Revising party structures and procedures that hinder the participation of women

Twenty years after this comprehensive affirmation of women’s rights and empowerment was adopted, it remains only partially fulfilled. If we look at the percentage of women in parliament, there are still huge differences between regions. In the Americas, 26.7 per cent of parliamentarians are women, in Europe 25,3 per cent are women, countries in Sub-Saharan Africa do have 22.1 per cent women and numbers are even lower if we look at the percentage of women parliamentarians in Asia (18.8 per cent), the Arab States  (17.9 per cent) or the Pacific scoring the lowest with only 12.7 per cent Parliamentarians.  (Source IPU, December 2014)

If we look at women in ministerial positions, the situation is not better. The Americas has the highest percentage of women ministers at 22.9 per cent, followed by Africa (20.4 per cent), Europe (18.2 per cent, Pacific (12.4 per cent), Asia (8.7 per cent) and Arabic region (8.3 per cent).In 2014, there were still countries that did not have women at all in government– Lebanon, Saudi Arabia, Pakistan and Brunei Darussalam, San Marino, Bosnia and Herzegovina, the Solomon Islands and Vanuatu.(Source UN Women-IPU Map on Women in politics 2014)

Although less data has been collected in relation to women and decision making in the public service, UNDPs Global Report on Gender Equality in Public Administration (GEPA) shows that also in this sector a lot of work has to be done.

Confronted with the slow progress, more than half of all countries use some type of gender quota for an elected office. 60 countries and territories/special areas around the world use legislated candidate quotas (which may be used in conjunction with reserved seats or voluntary party quotas), 36 countries and territories/special areas use the system of reserved seats (few of which also use legislated candidate quotas as well) and in 37 countries and territories at least one political party represented in parliament uses a voluntary party quota (countries with both, legislated candidate quotas for national legislatures and voluntary party quotas are excluded from this number) (Source: International IDEA, Atlas of electoral gender quotas, 2014). Quotas are only one example of how some countries have tried to close the gender gap in political participation.

Governments have also worked towards the second component that calls for increasing women’s capacity to participate in decision making through projects to enhance the capacity of national machineries for the advancement of women and mainstreaming of the gender perspective and providing training programs that increase women's ability to participate in and have influence over the policy-making process. Part of these efforts included strengthening cooperation among national machineries, reinforcing networking and creating opportunities to learn from international experience.

Despite the fact that many of the gaps and challenges related to the full implementation of the Beijing Declaration and Platform for Action (BPfA) are well known, they persist nonetheless.  The Beijing+20 review provides the opportunity to reignite global discourse and renew political commitment to accelerate implementation of the BPfA. We would like to hear your thoughts on what it will take to finally make the vision of Beijing a reality.