Freedom House Freedom on the Net 2016. Silencing the Messenger: Communication Apps Under Pressure

Freedom House Freedom on the Net 2016. Silencing the Messenger: Communication Apps Under Pressure 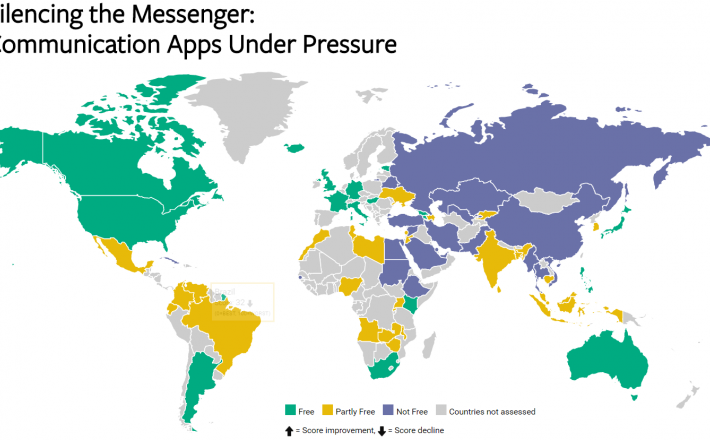 Freedom House has published its new report ‘Freedom on the Net 2016. Silencing the Messenger: Communication Apps Under Pressure’.

Internet freedom has declined for the sixth consecutive year, with more governments than ever before targeting social media and communication apps as a means of halting the rapid dissemination of information, particularly during anti-government protests.

Public-facing social media platforms like Facebook and Twitter have been subject to growing censorship for several years, but in a new trend, governments increasingly target voice communication and messaging apps such as WhatsApp and Telegram. These services are able to spread information and connect users quickly and securely, making it more difficult for authorities to control the information landscape or conduct surveillance.

These are the key findings:

This year, the report highlights some internet freedom issues as they affect women specifically. The India report, highlights research which explores the negative effect of online harassment on women's participation online, as well the unique threats faced by female online activists in Mexico who challenge the social and institutional norms which tolerate violence against women. There is also an emphasis on the specific economic and professional disadvantages faced by Nigerian women who lack access to the internet.