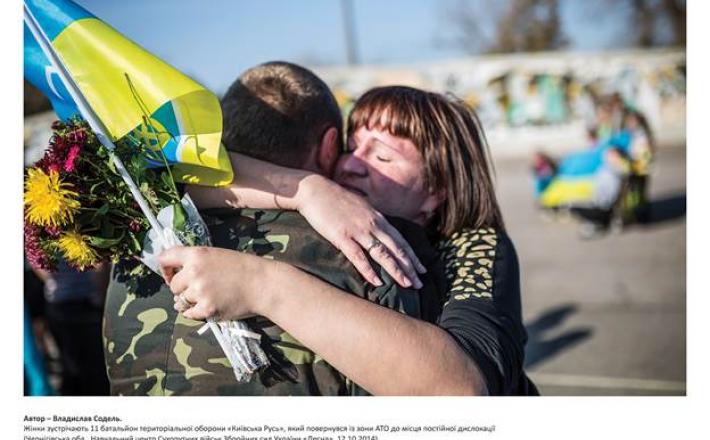 4 December 2014 –A photo exhibition "Women and conflict in Ukraine", organized  by the UN Office in Ukraine together with the Ministry of Social Policy and Ukrainian Women's Fund. More than 40 pictures have been selected to be exhibited depicting stories of Ukrainian women performing different roles in the challenging times for Ukraine.

Welcoming the visitors of the exhibition Mrs. Marina Poroshenko, the First Lady of Ukraine and President of the Petro Poroshenko Charity Foundation, thanked the organizers for their attention to issues of gender violence and said: "These pictures do not only depict women. They depict women's strengths and weaknesses, courage and vulnerabilities, worriesand pain. These women are very different, but similar in one main thing - they do not surrender to difficulties. "

"Fighting that started on Maidan one year ago was linked with a new vision of development, a new level of economic and social development, a new level of security in the country. I am confident that these goals and aspirations will come true much faster if women have more economic and political opportunities, if equal access to decision-making process in the country is provided for both men and women, "- said Mr. Neal Walker, UN Resident Coordinator in Ukraine.

The role of women in different spheres of public life is growing worldwide, includingUkraine. According to the results of the last parliamentary elections, there are 48 femaleMembers of Parliament now, representing 11% of the total number of deputies. It is the largest number of female deputies since Ukraine’s independence.

However, women's representation in the central government remains very low compared to the world average, which is 25-30%. Women's access to leadership positions in other areasalso remains limited, and in everyday life women often suffer from violence.

Commenting on these statistics, Ms. Iryna Herashchenko,the president's representative on the settlement of the situation in Eastern Ukraine, noted that "It is unacceptable figure for the country where 65% of the population are women. Of course, it is positive that there are 5 more women in the current Parliament compared to the previous one. But still we can not talk about social elevators in a country that largely rests on women. Today we talk about 16 Days of Activism against Gender-Based Violence, and this problem is really urgent in Ukraine. It has been ignored for many years in Ukraine. It is not fine that we still have not ratified the Istanbul Convention. 12 countries have already ratified it,  and we still only debate on this issue. I hope that the new government, the new Parliament will doevertything to address this issue. "

The photo exhibition "Women and conflict in Ukraine" is part of the campaign “16 Days of Activism against Gender-Based Violence” that is held in all countries around the world from 25 November, the International Day for the Elimination of Violence against Women, to 10 December, Human Rights Day. This global campaign is aimed to galvanize action to end violence against women and girls and stress that gender-based violence is an international human rights violation.

During her speech Ms. Nuzhat Ehsan, Representative of the United Nations Population Fund in Ukraine, noted: "I hope that the revolution that happened will lead to changes in this area. It will provide better opportunities for women in employment and in the field of special legislation. And I really hope that the media will keep an increased interest in issues of women empowerment, authority and in particular gender-based violence. "

Unfortunately, gender based violence is widespread around the world, and Ukraine is no exception. According to a 2014 gender based violence prevalence survey carried out by the UN Populations Fund (UNFPA), 19,4% of women in Ukraine aged 15-49 survived physical violence; 7,9% survived sexual violence, 68% of survivors did not turn for help. This data proves the urgent need and importance of raising awareness about the issue of gender-based violence in Ukraine and taking concerted action against it.

Author – Kira Dzhafarova. The photo was taken in Station Kharkiv Volunteer Center in the beginning of September 2014. Every day about 500 internally displaced people from Anti-Terrorist Operation (ATO) area come there for help, particularly psychological, which is provided mainly by women-volunteers.