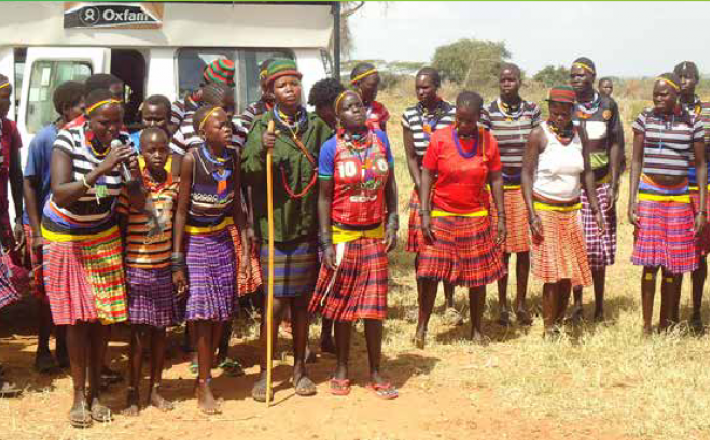 Oxfam GB’s Global Performance Framework is part of the organisation’s effort to better understand and communicate its effectiveness, as well as enhance learning across the organisation. Under this framework, a small number of completed or mature projects are selected at random each year for an evaluation of their impact, known as an ‘Effectiveness Review’. The project ‘Piloting Gender Sensitive Livelihoods in Karamoja’ (UGAB55) was one of those selected for an Effectiveness Review in the 2014/15 financial year, under the thematic area of Women’s Empowerment.

The Effectiveness Review took place in Kotido district, (Karamoja, Uganda) in August 2014, and set out to evaluate the impact of the project ‘Piloting gender sensitive livelihoods in Karamoja’ on dimensions of women’s empowerment in Karamoja. Project activities were implemented by Oxfam and partner organisations in the Kotido and Kaabong districts, Karamoja region, between July 2011 and March 2014.

The project intended to achieve two main objectives through the implementation of two distinct interventions.

The first objective was to improve the livelihoods of poor women through the support of enterprises. In order to achieve this objective, the project worked in Kotido sub-county, Kotido district, implementing a Gender Action Learning System approach (GALS) with 10 women’s groups, consisting of 40 women per group. The GALS is a community-led empowerment methodology that aims to promote economic, social and political transformation to gender justice. The approach works with women and men jointly to develop achievable visions for change, including journeys and road maps. The project also provided training on how to run small enterprises and businesses; supported women’s groups’ access loans to start new businesses; and provided equipment and inputs needed to startup businesses. For the remainder of this report, the set of activities that contributed to this objective will be referred as the project’s WEE activities.

The second objective was to reduce violence against women (VAW) by promoting awareness and influencing attitude and behavioural change. In order to achieve this goal the project used a variety of approaches and methods in a wider geographical area. Actions included training duty bearers and community leaders and supporting them to implement positive actions addressing violence against women within their communities and holding a number of awareness-raising sessions in schools through school drama clubs on violence against women. The project also implemented a ‘change makers’ strategy, recruiting a number of participants within project communities, talking to them about gender equality and the problems associated with domestic violence against women, and supporting them to reflect on and change their own attitudes and behaviours and encourage others to do the same. The expectation was that this strategy would improve levels of awareness and reduce violence against women more broadly within the project communities. These activities were conducted in four sub-counties in Kotido district and four sub-counties in Kaabong district. For the remainder of the report, the set of activities that contributed to this objective will be referred to as the project’s VAW activities.