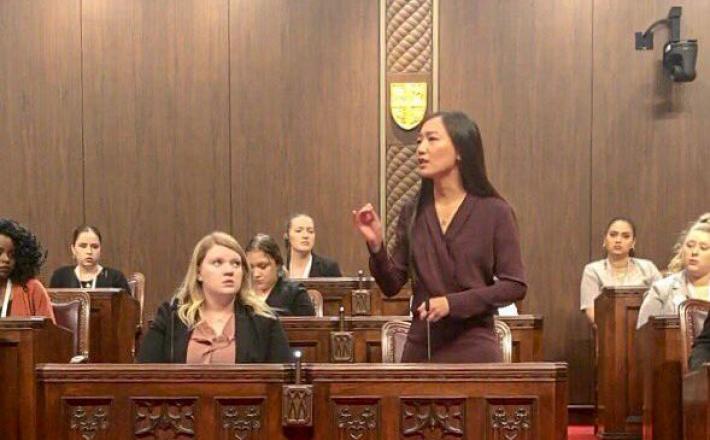 Young women from every federal riding in the country took part in a historic sitting in the House of Commons last Wednesday.

Caberry Yu, a second-year medical student at Queen’s University, was one of 338 women ages 18 to 23 to gather in Ottawa from April 1 to 4 to gain firsthand experience in Canadian politics.

The participants of the 2019 Daughters of the Vote leadership conference, organized by Equal Voice Canada, had the chance to sit in their respective member of Parliament’s seat, attend question period, and participate in workshops, forums, policy workshop sessions and various networking opportunities with elected officials.

“Being able to sit in the House of Commons was such a privilege, such an honour,” Yu, who represented Kingston and the Islands during the sitting, said during an interview with the Whig-Standard on the weekend.

According to Equal Voice, only 27 per cent of the seats in the House of Commons are held by women. The organization hopes to change that by giving young women the opportunity to engage with Canadian politics early on, an experience that could one day influence them to run for office.

Yu said there were a number of reasons she wanted to be involved in the Daughters of the Vote conference, including her interest in politics, but also her desire to meet strong female leaders.

“There are a lot of issues in Canada, and I think young women have lots of knowledge that they can bring to the table,” she said. “I wanted to meet young female leaders from across Canada and hear their perspectives on certain issues, and I thought that it would be something for me to take away because I wanted to learn more from them.”

Click here to read the full article published by Whig Standard on 8 April 2019.