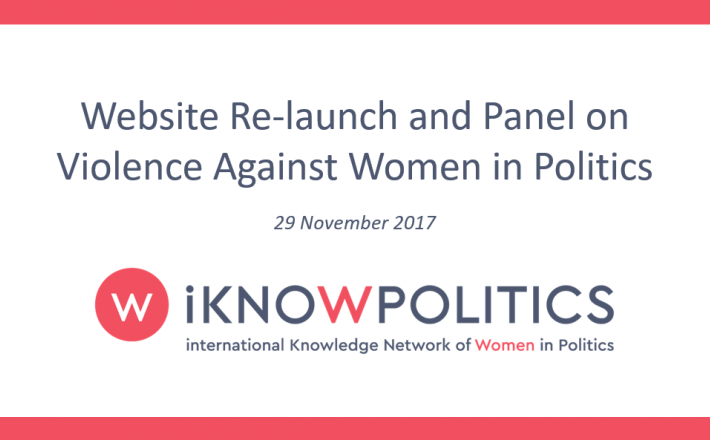 To mark the iknowpolitics.org website re-launch, the iKNOW Politics partners gathered for a panel discussion on ending Violence Against Women in Politics during the 16 days of Activism Against Gender Violence.

Inés V. Carrasco A., First Secretary, Permanent Mission of the Plurinational State of Bolivia to the UN

Programming Research on Ending Violence Against Women in Politics

Never have women been as present in politics than today. Women run governments. They participate in elections as candidates. They preside as judges. They often vote in larger numbers than men. But women’s increasing political participation is met with increasing Violence against Women in Politics (VAWP). Different from political violence perpetrated by political adversaries, VAWP specifically targets women. It is a violent response aimed at reaffirming the stereotype that “women are not made for” or “should not meddle in” politics. More frequent, and more often psychological and sexual in nature than political violence, VAWP deprives women of exercising their political rights fully, freely and in security. It also undermines the credibility of democratic processes and institutions.

VAWP is only now emerging from research and policy margins due to lacking data and standard indicators, limited political will and stigma of gender-based violence. A recent UN Women and UNDP programming guide on violence against women in elections (2017) shows that even limited available data suggests VAWP is widespread globally, manifesting both publicly and privately as acts of election violence, restricted movement to vote, politically motivated sexual assault or gender-specific psychological abuse. A 2016 study by the Inter-Parliamentary Union (IPU), based on in-depth interviews with female Members of Parliament, showed troubling levels of psychological, sexual and physical violence, especially through social media and in the premises of the parliament.

Member States are committed to “eliminate all forms of violence against all women and girls in the public and private spheres, including trafficking and sexual and other types of exploitation” (Sustainable Development Goal Target 5.2) and “ensure women’s full and effective participation and equal opportunities for leadership at all levels of decision-making in political, economic and public life” (SDG Target 5.5) by 2030. Only one country in the world (Bolivia) has a law criminalizing VAWP, though others have drafted national legislation or judicial protocols. Ending this phenomenon requires engagement of institutions and political stakeholders, citizens and leaders alike.