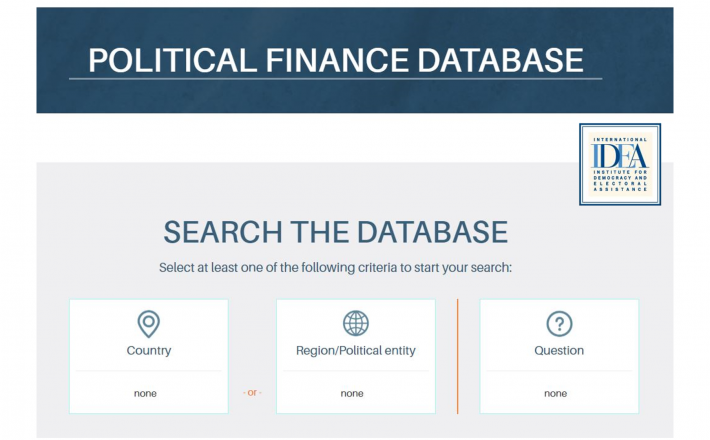 The database questions were revised to capture this reality in 2012 and 2016, with the most recent revision completed in November 2018. In the 2018 update, the number of research questions increased to 74 questions from the previous 43 questions in 2016 to capture a comprehensive overview of political finance regulations. Questions now include information on candidate finance, abuse of state resources, vote buying, lobbying, asset disclosure and gender targeted public funding. The new data for 180 countries was collected throughout 2017 and 2018.

The database provides answers to fundamental questions on political finance within four broad categories: a) Bans and Limits on Private Income, b) Public Funding, c) Regulations on Spending d) Reporting, Oversight and Sanctions. Users can search the comprehensive database by country, region or question as well as customize and save the data.

The Political Finance Database provides country-specific data, which can be viewed for a single country or comparatively allowing the user to view prevalence of different regulations and provisions between countries and regions.  It is our intention that the database is used by all who are interested in how money in politics is regulated, but in particular legislators, regulators, political party officials, civil society activists, journalists or concerned citizens.

The Political Finance Database is a repository of political finance regulations. As with many areas of public policy, the passing of a law does not automatically bring compliance.  Globally, scandals regarding money and politics illustrate that laws are breached and loopholes exploited. In other situations, governments may ignore or abuse regulations to further their own interests. These facts do not negate the value of collecting the global political finance regulations, it simply means that we cannot assume that these provisions are adhered to or enforced in a manner we might anticipate. Without regulations, there is nothing to adhere to or enforce; these provisions present the natural starting point for any study of money in politics.

1. Bans and limits on private income

The first section looks at bans on who can contribute to political parties and candidates and how these donations are limited.

The second section covers the provision of direct and indirect public funding available to political parties and candidates.

The third section deals with the rules for how much and on what political parties and candidates can spend money.

The fourth section addresses the requirements for financial reporting, oversight of political finance regulations and the sanctions that are available for breaches.