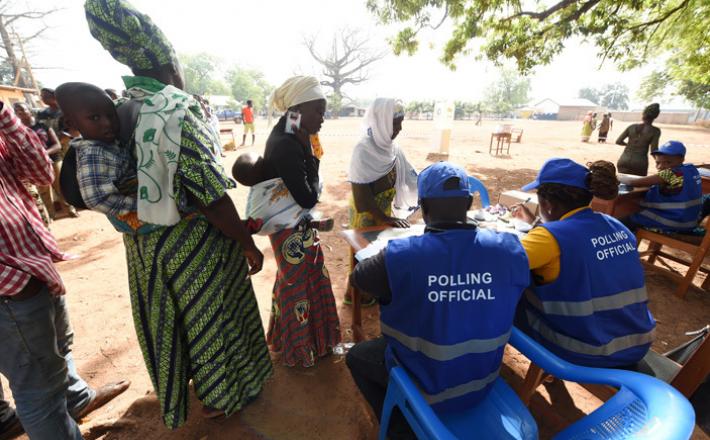 In December 2016, Ghana held its seventh parliamentary and presidential elections since transitioning from decades of military rule in 1992. In keeping with a pattern of alternating the governing political party every eight years, the New Patriotic Party (NPP) beat the National Democratic Congress (NDC), bringing a new president and new party to power after eight years of NDC rule. In keeping with another pattern in Ghana, very few women were elected to parliament, even though more women were elected than in 2012. Thirty-six women were elected to Ghana’s 275 member parliament (13.1 percent) - up from 30 women (10.9 percent) in 2012 – the largest number and greatest percentage of women members of parliament (MPs) in Ghana’s 60 years of independence. And yet despite the slight improvement, Ghana still lags well behind about two dozen African countries with 20 percent women, or well more, in their parliaments (not to mention dozens of other countries with more women MPs). Women fare better in Ghana in the other two branches of government, where they are appointed – rather than elected – to cabinet or the courts.

Over the years, scholars have offered different explanations for the very low percentage of women in Ghana’s parliament, including: the impact of gender-based inequalities, resistance from traditional leaders, the failure of governments to abide by international commitments, the harsh nature of Ghanaian electoral politics, and political parties’ overall unwillingness to facilitate the effective participation of women. More fundamentally though, Ghana has a plurality majority – ‘first-past-the-post’ - electoral system, like the United States, the United Kingdom and other Anglophone African countries. This electoral system, in which individuals stand for office in single member constituencies, is considered much less ‘woman friendly’ than the proportional representation electoral system found in most European and many African countries (in which voters vote for political parties and their lists of candidates, rather than for individual candidates). In addition, Ghana has no electoral gender quota for parliament (despite having one briefly in the early 1960s). All over Africa (and other parts of the world), electoral gender quotas have helped dramatically to boost women’s representation in parliaments.

In the 2016 parliamentary elections there were 136 women candidates out of 1,158 candidates overall. Thus, as in most elections in Ghana since 1992, women won seats in parliament roughly in proportion to their candidacies, or a little better. Indeed, in general elections in Ghana, women candidates for parliament stand a good chance of winning - there just are not enough of them. Of the 136 women candidates in 2016, 40 were from the NDC and 29 from the NPP; the remaining 67 were from smaller parties or were independent candidates and were highly unlikely to win a seat under Ghana’s stable two party system. The fact that 36 of the 69 NPP and NDC women candidates won their seats suggests, at a minimum, that Ghanaian voters do not discriminate against women candidates in the general election. Of the 36 women who won, 12 are from the NDC and 24 from the NPP. In the last (sixth) parliament, 16 women MPs were NDC and 14 NPP, reflecting the parties’ respective strengths in parliament. The fact that only about a third of NDC women won and that such a high percentage of NPP women won may, again, simply reflect the relative strengths of the parties in parliament. What the numbers do not clearly reveal is whether the two major parties were strategic in the way that women were – or were not – encouraged to stand in a given constituency.

In Ghana, as in many African countries with plurality majority electoral systems, the critical moment for women candidates is the party primaries. We do not know whether the problem is that not enough women are willing to stand in the primaries of the two major parties, or that they simply are much less likely to win if they do stand; that research is ongoing. We do know that primaries have been prohibitively costly for all candidates in Ghana, requiring outlays of cash, food, fuel, cloth, mobile phones and more. And primaries are especially costly for women who are likely to have fewer resources and for whom fundraising is much more challenging. We also know that a fairly vicious ‘politics of insult’ pervades elections in Ghana, perhaps especially during the primaries, and women candidates are particularly targeted in a host of demeaning ways. In recent years, the two major parties have attempted some measures to bring more women into parliament, such as discounted filing fees for women aspirants, and they have considered (though not necessarily implemented) other measures such as standing women candidates in ‘safe seats’ or in seats already held by women MPs. In the most recent primaries the NDC sought to mitigate the influence of vote-buying by expanding the selectorate and preliminary findings suggest that more women may have won NDC primaries as a result. But for women to make significant inroads into parliament in Ghana the primaries process will need to be further evaluated and likely considerably reformed. Only then will there be the number of women candidates to elect more women to parliament in Ghana.