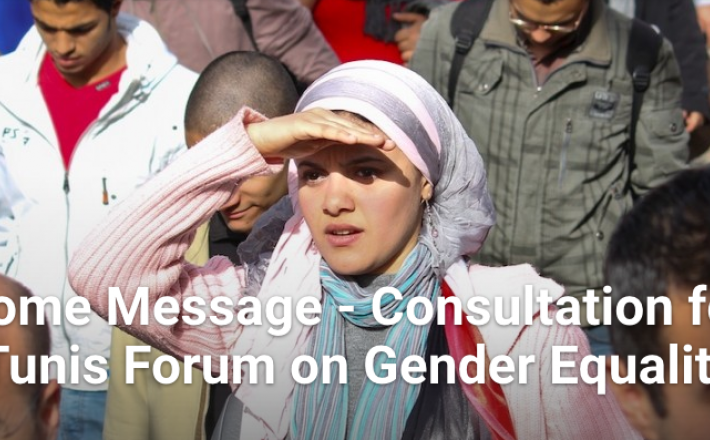 The Government of Tunisia, the United Nations Development Programme and UN Women, are organizing the Tunis Forum on Gender Equality that will take place April 24-26.

The Tunis Forum will take place one year before the 25th anniversary of the adoption of the Beijing Declaration and Platform for Action, as well as one year before the 20th anniversary of UN Security Council Resolution 1325 which set the standard for women, peace and security. The Tunis Forum will also take place before the first Global Sustainable Development Report is presented to the autumn summit on the SDGs and will be an opportunity to integrate and connect the key elements of these processes and highlight the important role that civil society can play.

The Tunis Forum will also explore the potential transformative role of women participating in local spaces/local government; in helping render cities safer for women; in working towards more sustainable cities and in re-envisioning transportation systems and public spaces so that they respond to the differing needs of all sections of the population, whatever their gender, age or physical ability. It will also provide a platform to explore the role of  new trends in innovation and technology in encouraging women's economic empowerment.

The Tunis Forum will be a follow up to the Stockholm Forum held in April 2018 and will continue the spirit of co-creation in putting together the agenda including the successful model of holding simultaneous sessions, co-organised and hosted by a wide range of organisations.  There will be four simultaneous discussions throughout the forum. Sessions do not need to be traditional and we would welcome more creative ideas, including music and poetry, but there is space for serious academic based discussion too.

To this end the purpose of the online consultation is to engage champions of gender equality from various regions of the world in a global dialogue to help identify key subjects that are not always aired and that can form the basis of the agenda. The consultation is expected to provide the Government of Tunisia as well as UNDP and UNWomen with ideas, suggestions and recommendations for the agenda, for panel organisers and for key participants with the key aim to influence the dialogue on Beijing +25.

See here to join the consultation.