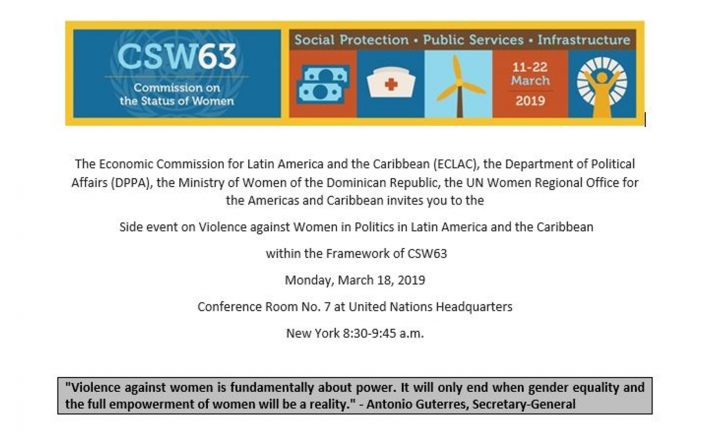 Currently, Latin America is the region of the world with the largest representation of women in national parliaments. However, behind this positive fact, worrisome realities hide. To achieve political participation, women often face an increasing climate of violence and gender intimidation.

In Latin America and the Caribbean, expressions of harassment and political violence against women are of a varied nature. Among the different types of political harassment are aggressions or threats during the campaign period, the assignment of districts where they have less chance of winning, and the absence of financial or personal support. But once elected, their situations do not always improve and women have to deal with issues such as the assignment to areas of little relevance with low budgets; discriminatory treatment by the media; greater demands for accountability; and intimidation, threats or physical violence directed at themselves or their families, which in extreme situations may include rape or murder or other forms of violence (ECLAC, 2016).

Objectives of the event

The main objective of the event is to highlight political violence against women as a present reality in the region; pooling existing normative instruments to prevent, address and sanction it and identify key actors for its effective implementation.

While maintaining its commitment to the promotion and effective exercise of women's rights in general and more particularly in political rights, UN Women identifies in violence against women in politics a reality that prevents the full exertion of citizenship by women. In this sense, it encourages actions for countries to implement measures leading to the elimination and sanctioning of this type of violence.

Violence against women is expressed before, during and after the electoral processes. A problem faced by women running for office, as well as those who are elected, is political harassment. This harassment is expressed through different types of bullying, and in the most violent cases it can even result in life-threatening situations.  It is important in this context to analyze and establish visible good practices (from public policies to regulatory frameworks) for electoral and State bodies to prevent and counteract political violence against women in electoral processes.

Mario Castillo, Officer-in-Charge of the Division for Gender Affairs, Economic Commission for Latin America and the Caribbean (ECLAC)

Luiza Carvalho, Regional Director of UN WOMEN for the Americas and the Caribbean

Conclusions and next steps (10 minutes)