Participation of persons with intellectual or psychosocial disabilities in political and public life: A side event at COSP12

Participation of persons with intellectual or psychosocial disabilities in political and public life: A side event at COSP12 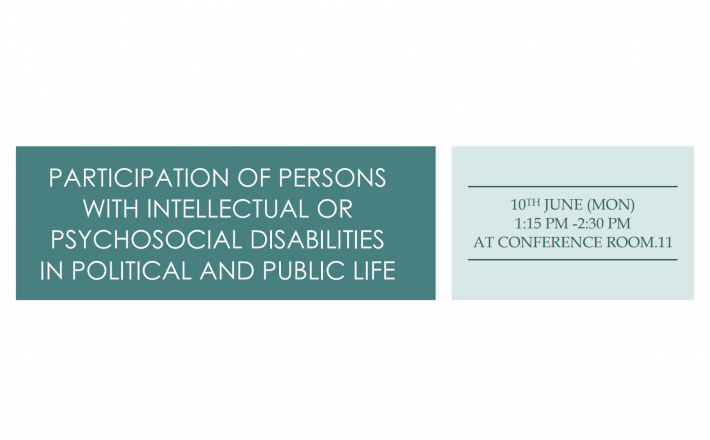 The 12th Conference of States Parties to the CRPD will take place at the United Nations Headquarters, New York, from 11 to 13 June 2019. The genuine participation of all citizens in political processes is a cornerstone of democracy. The Convention on the Rights of Persons with Disabilities (CRPD) addresses participation throughout the different articles as a cross-cutting issue. Article 29 states the rights of persons with disabilities to participate in political and public life without discrimination and on an equal basis with others. It enjoins States parties to recognize and support people with disabilities to form and join NGOs to advocate for their rights. Article 12 requires States parties to abolish discriminatory laws that deny people legal capacity on an equal basis with others and to provide access to the support people may require in exercising their legal capacity, including in exercising their political rights.

Yet, more than a decade after the CRPD entered into force, persons with intellectual or psychosocial disabilities are still often excluded from the political process. They experience multiple legal, institutional and social barriers to exercise their rights that prevent them from voting, standing for election for public office, civic participation, or simply having a say in their own lives. Persons with intellectual and psychosocial disabilities are often denied or restricted their legal capacity on the basis of having a medical condition or impairment or perceived as having deficient decision-making skills. Even when no legal limitations exist, other obstacles, for instance inaccessible party manifestos, no easy-read information about elections, prohibition of Side Event to the 12th Conference of State Parties to the Convention on the Rights of Persons with Disabilities assistance in voting and the lack of supported decision-making policies and schemes, make the exercise of these rights very difficult.

A significant number of countries have made positive changes, and more have embarked on legal, policy and institutional reform processes to address these barriers.