UNGA 2018: Side Event on Ending Violence Against Women in Politics

UNGA 2018: Side Event on Ending Violence Against Women in Politics 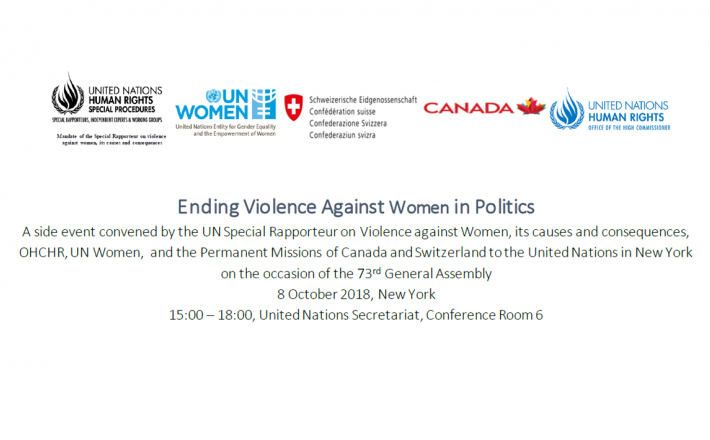 Violence against women in politics is a worldwide phenomenon. From polls to parliaments, the range of experiences of women in public life is rife with psychological, physical and sexual violence, both online and offline. These attacks are not simply part of the “rough and tumble” of political life; they are intentional ploys perpetrated by institutions, society and States, in some cases, to keep women from tipping the balance of power. The fundamental rights of women and men to live a life free of violence and to equally participate in and influence public affairs are enshrined in international and national law. Violence against women in politics is a violation of those rights.

Recognizing the gravity of this global scourge, the UN Special Rapporteur on Violence Against Women, its causes and consequences, Ms. Dubravka Šimonović, has made violence against women in politics a thematic priority for the mandate. For the first time, a thematic report (A/73/301) of the mandate has been presented to the 73rd UN General Assembly on violence against women in politics. The report sheds light on the manifestations of violence in the world today, calls attention to examples of how Member States, national institutions, civil society and brave, individual women are fighting back, and makes concrete recommendations for prevention and response.

The report draws on information collected through official submissions to the Special Rapporteur, as well as the findings from a March 2018 Expert Group Meeting co-organized with UN Women, OHCHR and the office of the Special Rapporteur, in collaboration with the Inter-Parliamentary Union and National Democratic Institute for International Affairs. More than 40 experts attended the meeting, including Members of Parliament and Local Government, academics, and representatives of regional human and women’s rights mechanisms, electoral management bodies, UN Agencies and civil society organizations. The EGM built on ongoing policy and programming work of these and other inter-governmental and non-governmental organizations to collect information, raise awareness about violence against women in politics, develop measures to end it, and support the Special Rapporteur’s preparation of the thematic report to the 73rd UN General Assembly.

Join Special Rapporteur Šimonović, OHCHR, and UN Women, in launching the Report and discussing its findings and recommendations alongside the UN General Assembly. Individual accounts of violence against women in politics will be presented. A report of the Expert Group Meeting will also be presented and available for distribution.

Click here to see the agenda of the meeting.