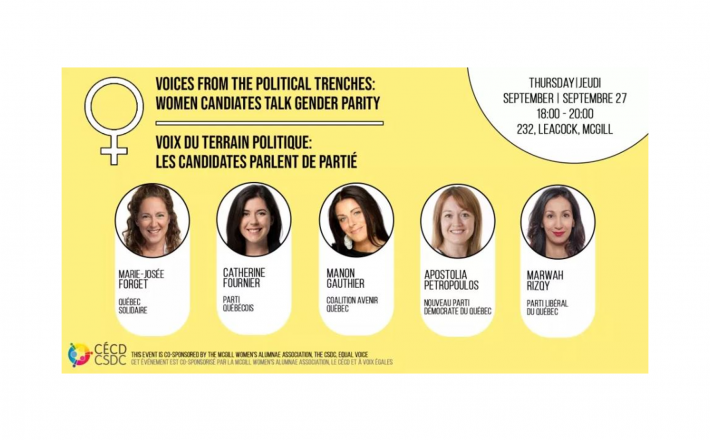 “Voices from the Trenches: Women Candidates Talk Gender Parity,” a roundtable discussion on women in Quebec politics. At this roundtable discussion, women candidates—including Marie-Josée Forget (Québec Solidaire), Catherine Fournier (Parti Québécois), Manon Gauthier (Coalition Avenir Québec), Apostolia Petropoulos (Nouveau Parti Democrate du Québec), and Marwah Rizqy (Parti Liberal du Québec)—will speak about their personal experiences in politics and will offer suggestions for addressing women’s underrepresentation in politics. After the speakers have presented their talks, Eleni Bakopanos will lead the panelists in a conversation before the floor is opened-up for questions from the audience.There will be a Question and answer period following the panel discussion.

*The event is BILINGUIAL (most of the politicians will be presenting in French).