“In too many countries laws still discriminate against women”

“In too many countries laws still discriminate against women” 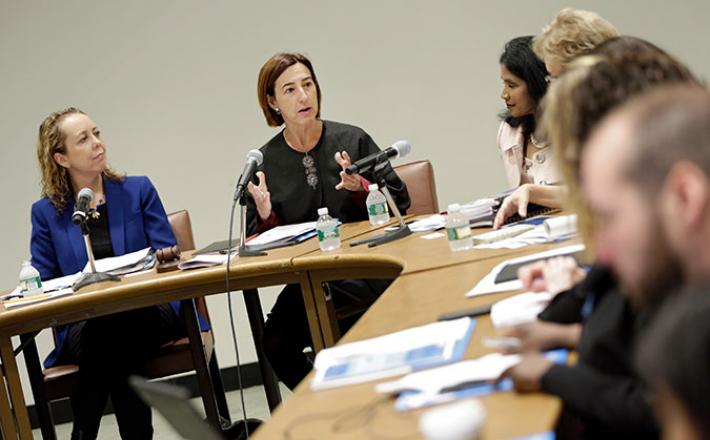 As countries start implementing the Sustainable Development Goals towards achieving a sustainable and gender equal future by 2030, discriminatory laws continue to hold women and girls back. Begoña Lasagabaster, UN Women Chief of Leadership and Governance Section, talks about a new UN Women initiative, Roadmap for Substantive Equality: 2030, launched on 14 February at the UN Headquarters, which will coordinate efforts to repeal and amend all laws that discriminate against women and girls.

What does legal reform have to do with gender equality and the Sustainable Development Goals?

The year 2016 marked the first year of implementation of the Sustainable Development Goals (SDGs), adopted by all countries around the world, envisioning a “world in which every woman and girl enjoys full gender equality and all legal, social and economic barriers to their empowerment have been removed”. The SDGs place gender equality at the heart of sustainable development. But how can there be equality between all genders when laws discriminate against women and girls?

Laws play out in our daily lives in very tangible ways. Take the issue of child marriage, for example. Over 700 million women alive today were married as children. Child marriage interrupts girls’ education, limits their livelihood options and forces them to take on the roles of wives and mothers before they are ready.
It’s a vicious cycle of inequality—girls married early are condemned to a life of dependency and poverty, and rendered more vulnerable to violence. They bear children before their bodies are fully matured, jeopardizing their own health and that of their children.

In countries where the law allows this to happen, child marriage thrives on. Conversely, where national laws that set the minimum age for marriage at 18 years are implemented and enforced, they can stop this practice. This is just one of many urgent legal reforms that are needed to make gender equality a reality for women and girls. Well-designed laws, when implemented, can be a powerful tool to improve the situation of the poorest and most marginalized women.

What is the Roadmap for Substantive Equality: 2030?

The Roadmap for Substantive Equality: 2030 is a UN Women initiative led by the Executive Director, which will focus on repealing or amending discriminatory laws in countries, and support the implementation of national laws that to advance gender equality and human rights.

This initiative is about acceleration of current programmes and initiatives; securing commitments from governments on designing and implementing gender-sensitive laws; and, strengthening partnerships with various stakeholders on the ground to leverage our unique strengths and roles in ending discriminatory laws . Passing of a law involves many steps and actors. You need the expertise as well as collaborations, from the start to finish—from drafting to lobbying, convincing politicians, accompanying the law through the parliament and then making sure that it is implemented in practice. Moving from policy to practice too requires a tremendous amount of coordination among the international and regional organizations, within national governments, parliaments, justice sector and civil society.

Building new partnerships and strengthening existing collaborations are at the core of this initiative. On 14 February, UN Women, along with Inter Parliamentary Union (IPU) and Equality Now, will be co-hosting the first of many dialogues with more than 20 partners, about how to meet the target of SDG 5, which calls for ending all forms of discrimination against women and girls in laws, policies and practice and identify strategies to eliminate legal barriers to women’s full and equal participation in the workforce by 2030.

How will the initiative work on the ground and in countries? What will be UN Women’s role?

No country in the world has achieved substantive gender equality—by which, I mean equality in policy and practice. The persistence of discriminatory laws, lack of laws that advance gender equality and lack of their implementation, drives and condones inequality between men and women, boys and girls, in practice.

In all countries where UN Women has presence, our mandate enables us to work on advancing legal frameworks for gender equality. Much of this work is already happening. What we need now are new synergies and a coordinated approach that accelerates the progress. The Sustainable Development Goal 5 gives us an unprecedented opportunity to bring efforts and partners together towards tangible outcomes.

The goal of the initiative is to ensure that by 2030, no country has legislation that discriminates against women and by 2020, we should be able to gauge the progress we are making. The initiative will leverage powerful advocates at the global, regional and national levels to bring on board decision-makers to repeal discriminatory laws and enforce laws that promote gender equality. It will form partnerships across and within countries to share good practices, winning strategies and increase collaboration to draft, reform and implement laws. UN Women will be building the capacity of government institutions and civil society to monitor progress.

Are there some specific areas where there’s more or less progress and opportunities than others?

Some areas of law reform have seen more progress than others.

For example, data from the UN Women Progress Report 2015 – 2016 shows that over 115 countries have passed laws on domestic violence, on sexual harassment, equal pay and guaranteed paid maternity leave. Similarly, women have equal rights to own property in over 100 countries, by law. Nevertheless, these numbers also indicate that there are a host of other countries that need to reform their laws in the same areas. No matter how small the number of countries, the presence of discriminatory laws can hinder substantive equality. For example, 27 countries discriminate against women in their ability to confer nationality on their children. In addition, over sixty countries deny women equal rights with men to acquire, change or retain their nationality, or confer their nationality on their non-national spouse. In many cases this has resulted in “statelessness” for their spouse and children. Statelessness negatively impacts education and employment opportunities because securing jobs and going to school often requires proof of citizenship and residence.

Even where there are laws, the work is still unfinished, because often implementation is lacking. So more efforts are needed to secure their implementation through appropriate budgets and policies.

Most interventions aimed at addressing discrimination or violence against women and girls have focused on legislations and policies. While an important step, such strategies in many cases do not address the root causes of gender inequalities and social norms, which make these issues particularly tenacious. Many discriminatory norms can even find their way into legislative drafting and interpretations when law makers are not cognizant of these biases and their impacts. This includes situations in which a woman’s testimony may be valued less than a man’s; or where a rapist can marry the survivor of the violence he committed the crime against (and get away with it); or where a man it entitled to commit a crime of “honour” against his wife; and where sons inherit twice as much as daughters.

UN Women has found that partnering with civil society and grassroots activists to raise knowledge and awareness of the public and that of lawmakers and the judiciary to be an effective catalyst for changing perceptions and norms. The Roadmap for Substantive Equality: 2030 initiative will therefore work with communities and leaders to understand which gendered social norms are at play in laws for different groups of women. Also, the initiative will support grassroots activists to raise awareness in communities and organize collective action against discriminatory laws and practices.