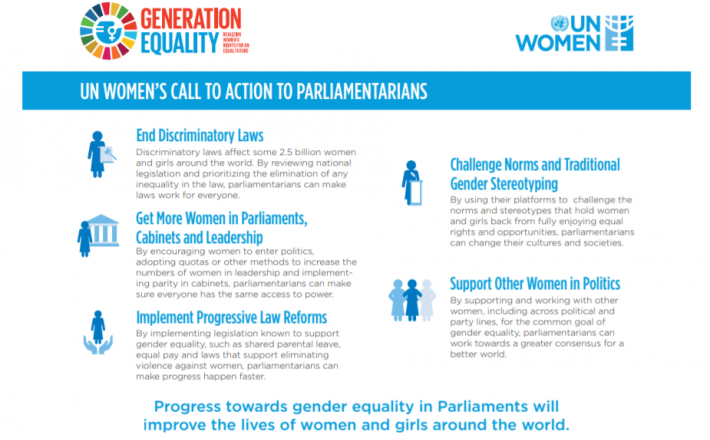 (Tokyo, 27 June)—In the lead up to the 25th anniversary of the Beijing Declaration and Platform for Action (Beijing+25) and UN Women’s ground-breaking campaign commemorating the anniversary, “Generation Equality: Realizing women’s rights for an equal future”, UN Women Executive Director, Phumzile Mlambo-Ngcuka, today called upon global parliamentarians to build on the experiences and best practices from Member States on how to achieve a gender equal world via legislation and parliamentary work.

At the Annual Summit of the Women Political Leaders (WPL) at the House of Representatives in Tokyo, Japan, UN Women Executive Director today launched a Call to Action to ensure that parliamentarians can become key drivers of gender equality. The WPL Summit is the largest global network of women in politics and brings together women Heads of State and Government, Ministers and parliamentarians from all over the world, preceding the G-20 Summit, which Japan is hosting 28-29 June.

UN Women’s Call to Action to parliamentarians comes at a critical moment when women and girls around the world continue to face an unprecedented set of challenges when it comes to achieving their goals. In 2020, it will be 25 years since the Beijing Platform for Action set out how to remove the systematic barriers that hold women back from equal participation in all areas of life, whether in public or in private. Despite some progress, real change has been extremely slow for the majority of women and girls in the world. Today, not a single country can claim to have achieved gender equality and multiple obstacles remain unchanged in law and in culture.

“At a time when we are seeing rising pushback against the hard-won gains for women’s rights, parliamentarians play a vital role in changing laws and mindsets around gender equality,” said Ms. Mlambo-Ngcuka. “By working to ensure political accountability on gender equality, commitments and sounding the siren for urgent political action for Beijing+25 and beyond, Parliamentarians can accelerate impactful change for women and girls globally”, she reiterated.

While political participation of women in politics has increased over the last few decades, it is still far from equal. Today, there are only 21 women leaders who serve as Head of State or Governments. Women’s representation in parliaments have increased slightly, but only reaches 24.3% of the total number. This Call to Action aims to accelerate progress towards gender equality in parliaments, improving the lives of women and girls around the world.

Gathering critical actions taken by countries that have succeeded in many areas towards gender equality, the Call to Action identifies five key acceleration points:

Over 2.5 billion women and girls around the world are affected by discriminatory laws—laws that impede gender equality and hold women and girls back. Currently, there are 37 countries where women don’t have the same rights as men when it comes to applying for a passport and 40 per cent of countries have at least one constraint on women’s property rights.

UN Women will organize during the 2019 United Nations General Assembly (17-30 September 2019) a special event with parliamentarians to discuss next steps on implementation and progress of the Call to Action.

For more information read the full Call to Action.