'Based in hatred': Violence against women standing in Colombia's elections

'Based in hatred': Violence against women standing in Colombia's elections 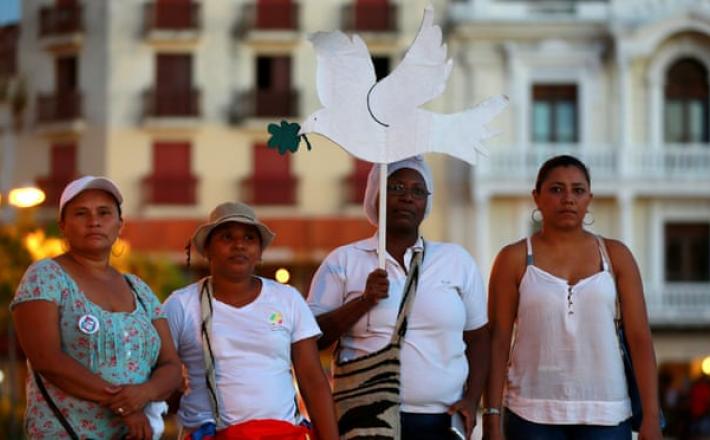 The body of mayoral candidate Karina García was found shot and incinerated in her car in the Cauca department of southern Colombia, on 1 September.

For weeks, García had reported receiving threats and asked the government for increased protection during campaigning for the local and departmental elections at the end of the month.

Since the political race officially began, seven candidates have been murdered around the country.

These elections will be the first to take place since the historic signing of a peace accord between the Farc rebels and the Colombian government in 2016, ending more than 50 years of war.

The assassinations, attacks and threats against candidates take place amid concerns about increasing violence in Colombia. Some analysts attribute the killings to armed groups looking to gain territorial authority and the control of the illegal drugs trade. Those candidates who support the implementation of the peace process, including the eradication or substitution of coca crops, risk becoming targets.

Amid the rising tide of violence, national women’s organisations are voicing concerns that attacks on female political candidates are shaped by gender dynamics.

Carolina Mosquera, researcher at feminist organisation Sisma Mujer, said women are being targeted both for running as candidates, and for disturbing the patriarchal order. “Male candidates are being attacked, but not for gendered reasons – not because they are men.” (...)

According to 2011 law, each party’s electoral list must include 30% women. Despite this, only 12% of all mayors in the country are women.

Ana Güezmes García, the Representative for UN Women in Colombia, said “one of the biggest challenges is women’s participation at the local level”.

Click here to read the full article published by The Guardian on 1 October 2019.