Cristina, a survivor of domestic violence, is 24 and has never voted before

Cristina, a survivor of domestic violence, is 24 and has never voted before 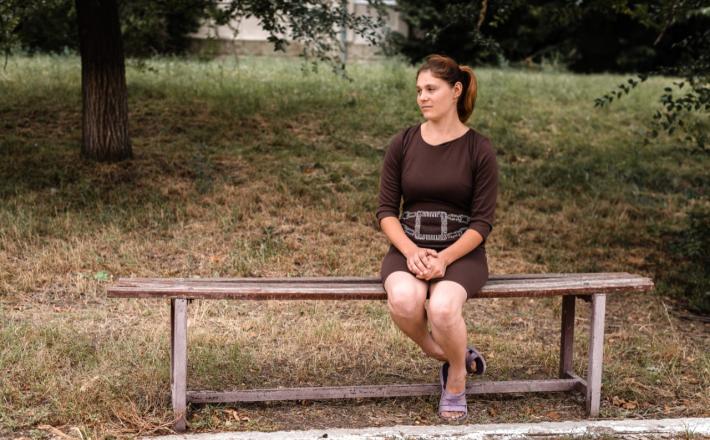 When he got to beat me, first he was grabbing my hair to hold me still, so he could beat me harder. I was trying to protect my belly, so he couldn’t hurt the child I was carrying. But when I got to the eighth month of pregnancy, he beat me so hard that three days later I gave birth to my baby.” This is how Cristina Petrov describes her life until recently and the time she carried Dumitru in her womb, a child who, guarded by his mother, was born healthy about a year ago.

Cristina is 24 years old and has never voted before. This wasn’t one of her thoughts or concerns at that time. A few years ago, she lost her mother. Her last memory of her dad is from the day he left out of the door and never came back. She had a difficult childhood, switching homes from one relative to another. She also dated different men. But with the last man in her life, she truly believed she could build the family she never had. But that was not the case.

“We didn’t have a wedding, we did not register our marriage, because he, just like me, is without parents. I was hoping we will create a real family, especially when I found out I was pregnant. I was happy. At first, he was behaving well, but happiness lasted only two weeks ... He started drinking, then he started to get violent with me. And when he found out that I was pregnant, while beating me he was accusing me that he wasn’t the child's father. I was trying to convince him that I didn’t have relationships with anyone else, especially since I wasn’t leaving the house that much, but he did not listen to me…”

A new start for Cristina and her child

Cristina gave birth to Dumitru and returned home to her partner, but he did not accept them, and chased her away along with her baby. She didn’t have a roof over her head, or anyone to go to. This is when she learned about the Maternal Centre “Pro Family” from Caușeni.

“I did not have a choice and I called this center and asked them to help me, to give me shelter as it was winter, and cold and I was having a small child and no place to go.”

At the Maternal Center in Caușeni, Cristina and Dumitru receive medical, psychological and legal support.

“Here I feel safe, I have everything I need, and I feel like home.”

Now, she can think about her and her child’s future. Because she can stay at the center indefinitely, Cristina is trying to look for a job that would provide a decent childhood for Dumitru, unlike the one she had.

“I want to be happy together with my child in the future, and to be able to raise him to the best of my knowledge. Although I am a single mother, I want to provide him with the best care possible. I never had a job before. My husband impeded me to work.”

"I will go next year to vote, to see how it goes”

This autumn, Cristina has learned something new. She learned that she has the unhindered right to be an active citizen in the community. She participated in an information session and a simulation of the Election Day – a first such experience for her.

If before the session, Cristina said she has never voted, because then she believed her vote would not change anything, now she has more confidence in the future: “I felt really good, I found out new things, I learned how to proceed to vote, because I knew very little or nothing about that matter. Thank you very much because I also learned why my vote matters. Next year, I will go to exercise my vote, to see how it goes, because it will be my first vote ever,” says Cristina.

The electoral education workshop dedicated to women in hardship conditions is part of a broader information campaign about the electoral rights of several distinct categories of voters from the Republic of Moldova – a joint effort conducted by 12 non-governmental organizations across the country in the framework of the project "Strengthening democracy in Moldova through inclusive and transparent elections", implemented by UNDP Moldova with the financial support of the United States Agency for International Development (USAID), the British Embassy in Chisinau through the Good Governance Fund and the Dutch Embassy through the Matra Program.

Ludmila Afteni is the Executive Director of the Association of Psychologists Tighina, which is conducting during May-November 2018 a series of electoral education sessions and simulations of the voting process for young people and women in hardship situations – beneficiaries of a number of maternity centers (shelters) in three districts: Caușeni, Anenii Noi and Ștefan-Voda. The Association has organized several such activities at the Maternal Center “Pro Family” in Causeni.

“The subject of electoral education is often met with certain skepticism. The first questions or comments we get are along these lines: "Why would I ever need that? I don’t think it is such big problem if I don’t vote." At the beginning of the workshop, women are very reserved, you do not read too much enthusiasm in their eyes or on their faces. But when we explain that voting in a free and confidential manner, every four years, is the same as exercising their right to health care, or is equivalent to the right of a child to get an education unhindered by anyone, then the discussions flow more openly, and the women end up telling their stories about elections that they witnessed themselves, or perhaps heard from someone else,” says Ludmila Afteni.

Such activities are joined not just by women living at the shelter for a while, but also those who only come here during the day. Often, the workshop has among participants young women and men, as well as mother with their children. Women learn about elections process, and most of them take part in a voting simulation exercise, experiencing first-hand what it means to be part of a democratic process.

At first, women do not even trust themselves

Tatiana Osadci has been the director of the Caușeni Maternal Center for seven years, while the center was founded 11 years ago. Since then, over a thousand women and girls in various hardship situations and over 900 children have been assisted by the Center.

“We offer a home and support for three categories of people: survivors of domestic violence, often mothers with children, survivors and potential victims of trafficking in human beings and mother-child couples facing financial or psychological difficulties. The women in our center reach us after they have faced severe risk situations threatening their life or, in some cases, also the life of their children. There are women whose self-confidence and hope in the future have been shattered as result of their traumatic experiences; some are uncertain whether that they can keep their children as they lack shelter and basic means to provide for them. Relationships with relatives are often very poor, and ultimately, they end up either running away or are being expelled from those homes,” says Tatiana Osadci.

The center can accommodate a maximum of 19 adult women and 14 children from one to three months. During this time, they are assisted and guided to find a home, a job, but also get informed.

“Apart from various NGOs which come to support us in organizing activities, the Center specialists put together a schedule, and organize 2-3 times a week several workshops moderated by psychologists, psycho-pedagogues, lawyers, nurses, social workers. Many of these activities are focused on re-gaining or increasing women’s self-confidence, as well as providing basic information on human rights and freedoms,” says Tatiana Osadci.

“If democracy matters, then my participation is important too”

The project "Strengthening democracy in Moldova through inclusive and transparent elections", implemented by UNDP Moldova, aims to reach to as many women as Cristina Petrov as possible. Cristina will go to the next election because now she understands better why going out and vote is important for her child's future.

“This is a challenge for them. “What shall happen if I vote too?” Women and girls are asking themselves all the time. In fact, we will all vote, for the first time, under the new electoral system. But they are more nervous than others. We want women to remember and understand that if democracy matters, then their participation is important too, and what they do on Election Day is their own decision,” says Ludmila Afteni from the Association of Psychologists “Tighina”.