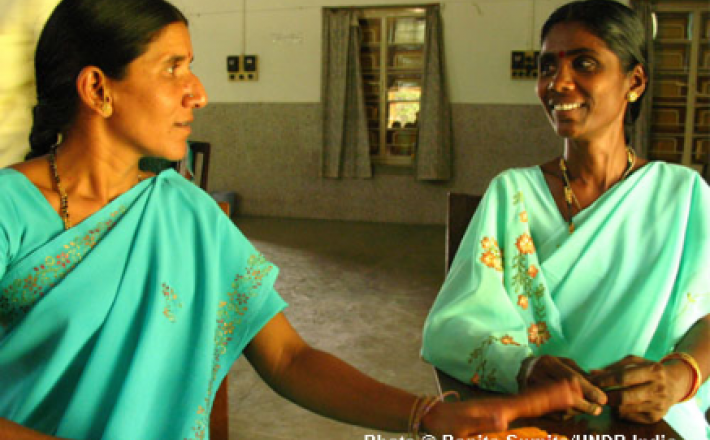 To empower elected women representatives, several initiatives supported by UNDP in partnership with the Ministry of Panchayati Raj, such as trainings, workshops, exposure visits are helping women bring socio-political change in the communities.

Sulochana Mulgi is an elected representative of Manedi Panchayat in Bidar district of the southern Indian state of Karnataka. But she never felt like a leader until some time ago. “The secretary of the Panchayat and the junior engineer used to mock me with questions they knew I did not have the answers to whenever I used to try to speak in a meeting,” she says.

“But now I question their work. They are accountable to me,” says Sulochana who underwent a training supported by the United Nations Development Programme (UNDP) in partnership with others including the government’s Ministry of Panchayati Raj. Shobhasani Saran, an elected representative from eastern Indian state of West Bengal, says she is no longer a mere puppet in the system. “I no longer sign blank cheques; I keep track of all the money.

Sulochana and Shobhasani are among those who benefited from the 73rd and 74th Amendments to the Constitution of India that paved the way for election of around one million women at the village, block and district-leves by reserving 33 percent of seats for women. On 27 August 2009, the cabinet has approved for an amendment in the Article 243(D) of the Constitution to raise this reservation for women in panchayats to 50 percent.

But across the levels of governance, concerns about the role and participation of women are repeatedly raised due to deeply etched inequalities, social stigmas, political barriers and limited efforts to equip elected women leaders with requisite skills.

It is, therefore, not surprising that even after 61 years of becoming a democracy only 10 percent, up by 1.7 percent since 2004, of the total number of parliamentarians in the world’s second most populous country are women. Though there is all around jubilation that 59 women have been elected to the 15th Lok Sabha (lower house of the Parliament), elections for which were held in May 2009, it is humbling to note that even now the country is still far behind some of its neighbours. In Bangladesh, 15.1 percent seats in the Lower House of the Parliament are held by women and in Nepal this share stands at 17.3 percent (HDR 2007-2008).

One of the key arguments given against reserving 33 percent seats for women in the Indian Parliament and State Assemblies that was tabled 17 years ago, is that women leaders are overshadowed by their male subordinates or even family members. UNDP-supported efforts, including some funded by the United Nations Democracy Fund, have been trying to address this concern. Through trainings, workshops exposure visits, etc., the initiatives empower elected women Panchayat representatives to become a bolder voice for the women in their communities.

Another notable approach is the training of women elected representatives along with training of women groups at the village-level. The process is called REFLECT. Its members plan a course of action and approach the elected representative or respective authorities to implement the action. A member of the REFLECT circle from Ashtoor Panchayat in Bidar district speaks of the faith people have in their group. “When a local liquor shop was creating problems for the people – safety concerns for women and children – the issue was first brought to the REFLECT circle because we are known as the problem solvers of the village. We then took the issue to the elected representative and the police. The liquor shop was shut down,” said Lalitha. There are several such incidents that REFLECT circles like this one have been able to resolve across other project states.

Sanju Devi, ward member from Alampur in Patna district (Bihar) recounts her helplessness: “I wanted to help the young widows in my village in my capacity as an elected representative. Enrolling them into a pension scheme could have changed their lives. But the Panchayat president was a woman overshadowed by her husband leaving me and other ward members no room to voice our concerns.” Sanju Devi, however, is not disillusioned. She believes she can try harder and seek advice from other beneficiaries in the project, who have become pillars of strength and support to each other. With number of women parliamentarians going up, here is hoping that women like Sanju Devi will realise their dream of leading the socio-political change in their communities and beyond.