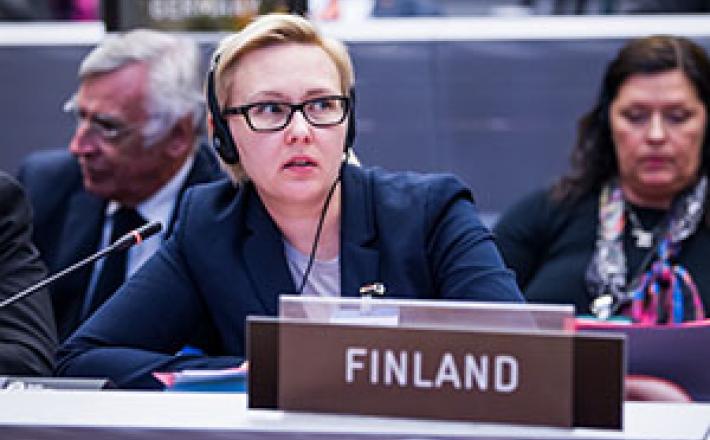 The IPU developed both the concept and definition of gender-sensitive parliaments and has been at the forefront of supporting gender-sensitive parliamentary reform. On 20 April, the Feminist Group of the Finnish Parliament held a meeting in Helsinki on gender equality in parliaments. At the meeting, Ms. Zeina Hilal from the IPU gave a presentation on the Plan of Action for Gender-Sensitive Parliaments and Evaluating the Gender Sensitivity of Parliaments: A Self-Assessment Toolkit. The Plan of Action was adopted by IPU Members at the 127th Assembly in Quebec, and 2017 marks five years since its adoption.

Participants at the Helsinki meeting included MPs, NGOs and academics. In her opening speech, the Speaker of the Finnish Parliament, Ms. Maria Lohela, said that Finland was among the most gender-equal countries in the world. Even so, Finland had to wait 40 years after the creation of its first unicameral parliament for the first woman to be named committee chairperson, and 90 years for the first woman Speaker of Parliament to be elected.

In the outcome document of the Summit of Women Speakers of Parliament organized by the IPU and UAE’s Federal National Council in Abu Dhabi in December 2016—which Ms. Lohela attended—participants resolved to attain gender equality in politics and parliaments by 2030 and to assess the gender-sensitivity of their respective parliaments.

The IPU encourages the Finnish Parliament to conduct a self-assessment using IPU’s Toolkit.