Today the global campaign Not Too Young To Run was launched at the first United Nations Forum on Human Rights, Democracy and the Rule of Law taking place at United Nations Geneva.

The campaign, launched by a partnership consisting of the Office of the UN Secretary-General’s Envoy on Youth, the UN Development Programme (UNDP), the Office of the High Commissioner for Human Rights (OHCHR), the Inter-Parliamentary Union (IPU), the European Youth Forum (EYF) and the Youth Initiative for Advocacy Growth & Advancement (YIAGA), aims to elevate the promotion of young people’s right to run for public office and address the wide-spread issue of age discrimination.

“Young people have every right to be active participants in civic and public life and it is time to ensure they no longer face arbitrary barriers to run for public office – whether at the local, regional or national level,” said the UN Secretary-General’s Envoy on Youth, Ahmad Alhendawi.

“If young people are not too young to get married, to serve in the military or to choose the parliamentarians who will represent them, they are Not Too Young To Run,” said IPU Secretary General Martin Chungong. “IPU calls for the age at which people may run for political office to be aligned with the legally permitted voting age. IPU Member Parliaments agreed to this in 2010 when they adopted a resolution on youth participation in the democratic process. If more young MPs were elected, there would be more role models from whom young people could take their lead and engage in politics. The time has come to increase youth representation in politics and we are happy to join forces with the United Nations Envoy on Youth in this endeavor,” he added. 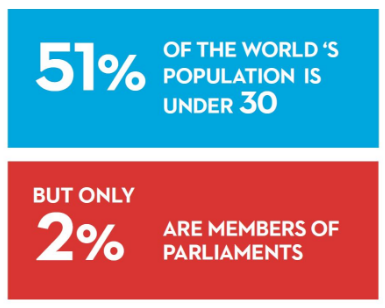 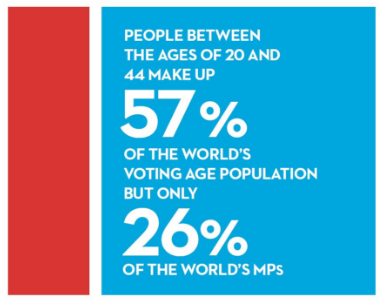