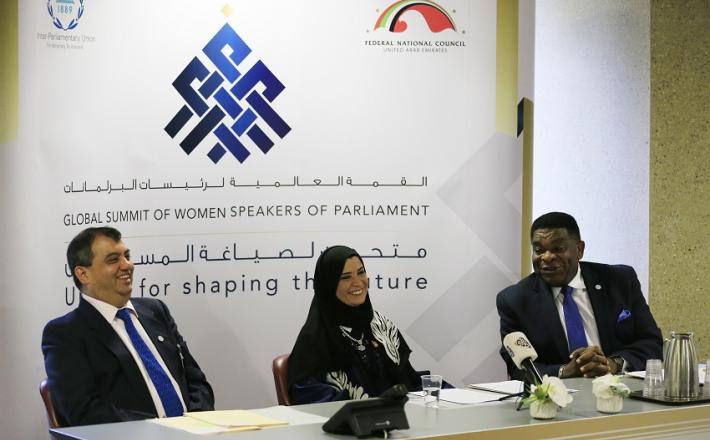 The Global Summit of Women Speakers of Parliament launched this morning in the United Arab Emirates capital city of Abu Dhabi.

The summit, which involves two days of forward-looking panels and debates in collaboration with the Inter-Parliamentary Union is themed: ‘United for Shaping the Future’.

The summit brings together 50 women speakers of parliament representing countries around the world, as well as government officials, diplomats, corporations, civil society organisations, academia, and media from around the world.

In her opening speech, Dr. Amal Al Qubaisi, speaker of the Federal National Council of the UAE highlighted the progress made in the UAE and around the world and honoured the patrons, partners and participants of the Summit, celebrating the importance of having 50 female speakers of national parliaments representing countries around the world. “The Women Speakers Summit held in Abu Dhabi is rooted in the same values as the UAE model of unity,” said Dr. Al Qubaisi

IPU President Saber Chowdhury expressed highlighted the path to today started with only twelve women in these positions one decade ago.

Sheikh Saif Bin Zayed Al Nahyan, Deputy Prime Minister and Minister of Interior (UAE) keynoted the event with an inspiring TED-style talk which examined technological advancement and how it has changed modern societies. Talking about the importance of the Summit, Sheikh Saif Bin Zayed Al Nahyan quoted a poem saying “A woman is a school, if you teach her, you teach an entire generation. If a mother never learns how can she teach the next generation.”

The Deputy Prime Minister discussed the value and dangers of social media, praising companies like Twitter for shutting down more than one hundred thousand accounts of Daesh before ending his keynote with the ever-important message of family and unity.

Outgoing Secretary-General of the United Nations, Ban Ki-Moon sent a video address to the Summit.

The Summit is the first of its kind in the world, addressing political, social, economic, environmental, and demographic issues, as well as political, technological, and economic developments that are poised to transform the world. The event will also discuss the effectiveness of policies, regulations, and social will in facing, or benefiting from, these developments. In addition, the high-level event will shed light on issues pertaining to women empowerment, gender balance, legal and legislative challenges posed by great technological transformations to existing laws and regulations, as well as avoiding and mitigating conflicts to which they might lead. Furthermore, an effort will be made to identify scientific and technological possibilities to overcome pressing issues such as global warming, climate change, water scarcity and low biodiversity.

Notably, the panellists will focus on values of tolerance, co-existence, peace, and moderation, in addition to reinforcing the international message embedded in the ‘Abu Dhabi Declaration for Shaping the Future’ that will be released during the final ceremony of the summit.

The Declaration will demonstrate the vision of women speakers of parliament to address issues of global interest. The report will also offer a compilation of the summit’s outcomes and final recommendations to global priorities, reflecting regional and international political, economic, social, and environmental trends.

The ‘Abu Dhabi Declaration for Shaping the Future’ supports the efforts of political and parliamentary organizations in enhancing security and stability, as well as building a better future where the governments and organisations of the world adopt regulations and policies that promote sustainable development, resolve armed conflicts, and mitigate political extremism.

As part of the Global Summit of Women Speakers of Parliament, a ‘Future Exhibition’ will be held in collaboration with prestigious UAE entities and organisations. The exhibition will aim to stress the importance of having an outlook for the future, supporting scientific research, promoting innovation, and creating an environment that fosters creativity to build smart cities. It will also spotlight success stories of innovation, and showcase young inventors’ latest achievements. The exhibitions will focus on nuclear energy, clean and renewable energy, transportation, communications, technology, education, health, and water.

Furthermore, the summit will address key topics related to the legislative and regulatory role of parliaments. It will also concentrate on the importance of the collective role of women speakers of parliament, and their efforts in addressing current and future obstacles facing quality of life and projects to create sustainable wellbeing around the world.