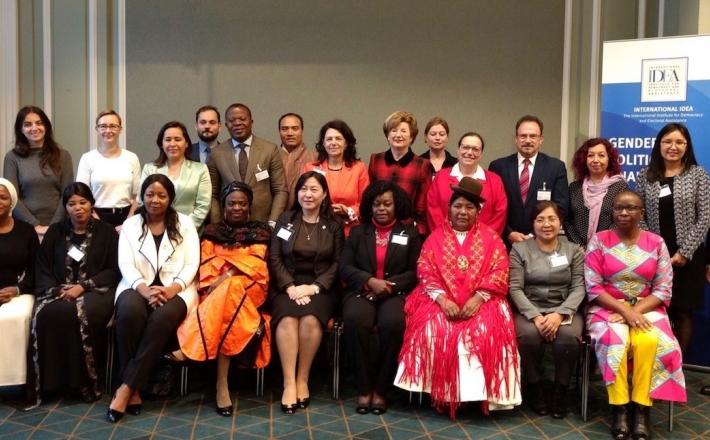 International IDEA organized the Inter-Regional Roundtable on the Intersections between Gender and Political Finance in Brussels on 16-17 October 2019. The Roundtable provided a forum for female and male politicians and practitioners from about 20 countries to discuss the interlinked dimensions of gender and political financing and how they influence gender equality in politics at all levels.

The Secretary-General of International IDEA, Dr Kevin Casas-Zamora opened the Roundtable highlighting that women’s limited access to finance for campaigns is often identified as a key barrier hindering greater gender balance in parliaments and political parties. “A political sphere dominated by money is almost certainly a political sphere dominated by men”—it is often not the lack of able women, but rather the economic inequality, including access to resources to finance political campaigns, between men and women and limited opportunities for women to exhibit their skills that perpetuate their uneven representation in politics.

The two-day Roundtable focused on a number of thematic issues relating to gender and political finance, including the use of gender-targeted public funding, gender-sensitive intraparty measures, the role of male leaders, and opportunities to use ICTs and social media for women’s fundraising and campaigns. Bringing together participants, including male and female politicians from about 20 countries, the roundtable enabled an interactive exchange of experiences, good practices and challenges on how political finance can influence the access of women to elected positions in different countries around the world.

While there is a lot of work to be done to break down the social and cultural barriers in order to fully enable women to enter politics, the discussion highlighted that developing gender sensitive political finance regulations such as gender-targeted public funding proved to be useful in some countries. In addition, participants agreed that political parties with effective internal gender policies were one of the crucial success factors in achieving gender parity and ensuring equal access to political funding, as presented by the case of Belgium where women account for 43 per cent of the Parliament. The importance of involvement of male leaders in the development of such policies was highlighted with examples in Bhutan and Chile.

The roundtable also featured two sessions that focused on the potential of ICTs and social media for women’s fundraising opportunities. While women politicians and candidates are often subject to disinformation campaigns, examples of Kenya and Myanmar suggested that social media could provide women a platform to directly engage with the voters and set their narratives. However, the use of social media and ICTs by female politicians for fundraising were not yet a common practice in many countries. Online tools such as crowdfunding could be further explored and utilised in order to facilitate women to raise political funding.

Increasing women’s participation and representation in politics requires multi-dimensional efforts to address political, economic, social and cultural constraints. It is crucial to address women’s underrepresentation in politics through the linkages found between political finance and gender. Gender-neutral or gender-blind political finance regulations may inadvertently produce an unbalanced playing field among actors and thus impact the quality of democracy. Political finance regulations need to be introduced from a gender equality perspective. Detailed summary of the roundtable and video footage will be released in the coming weeks.