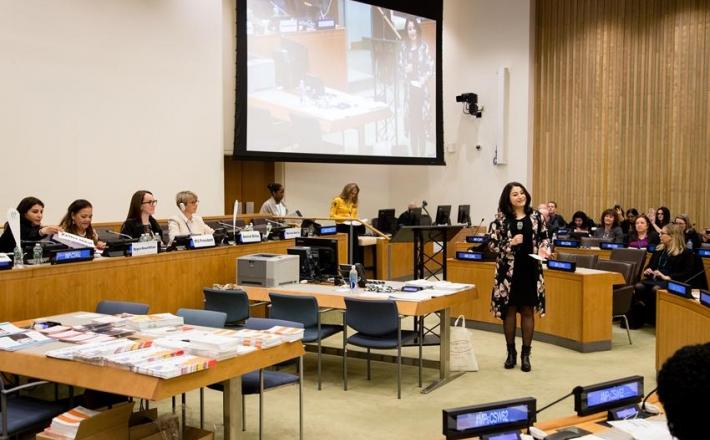 Although rural girls and women made up 40 per cent of all the women in the world in 2015, according to the United Nations, they lack a voice in decision-making. In many countries, they are either not taken into account in national laws and policies, development strategies and budgets, or their needs are insufficiently addressed. To draw attention to this, the priority theme of the 62nd session of the Commission on the Status of Women (CSW), which took place in New York from 12 to 23 March 2018, was the empowerment of rural women and girls.

On 13 March, the IPU, in cooperation with UN Women, held a parliamentary meeting at the CSW, entitled “Parliaments deliver for rural women and girls”. MPs discussed ways to remove systemic barriers that rural women and girls face in realizing their rights and overcome the discrimination against them in law and practice. The meeting was opened by Gabriela Cuevas Barron, President of the IPU, and Purna Sen, Director of the Policy Division of UN Women, and chaired by Margaret Mensah-Williams, President of the IPU Bureau of Women Parliamentarians and Chairperson of the National Council of the Parliament of Namibia. Panellists included MPs and representatives of governments, civil society organizations and UN agencies. Over 140 MPs (including 116 women MPs) from 42 countries participated, as well as the Speakers of the Parliaments of the Bahamas, Canada, Namibia, South Africa and Uganda.

MPs committed themselves to advance legislative frameworks that guarantee rights, justice and equality for rural women and girls, repeal discriminatory laws and address gaps that impact negatively on their lives. They also agreed to use their power of oversight to ensure that the laws and policies make a real difference for rural women and are well funded.

Parliamentarians undertook to reach out to rural women and girls, both through face-to-face meetings and through mobile technologies. They agreed that it was important to facilitate rural women’s access to political decision-making, both in their communities and at the national level, including on climate change. Parliaments can make a difference in the lives of rural women and girls by better listening to them, and MPs at the meeting shared their experiences on this. For example, the Network of Mauritanian Women Parliamentarians, with support from the IPU, has carried out outreach activities in rural areas: women MPs reached out to 64 local leaders and over 2,500 people, including rural women, thus strengthening their links with local communities. Based on the hearings during the outreach, the Network raised questions in Parliament on budget laws. Namibia has rural women’s parliaments that interact with the national Parliament. The French Parliamentary Delegation on Equal Opportunities has held hearings with rural women to craft a responsive rural development policy.

The outcomes of the parliamentary meeting were presented to the CSW by Ms. Mensah-Williams.

Watch the videos of the parliamentary meeting.

Watch the press conference on the new IPU publication, Women in parliament in 2017 : The year in review with Ms. Cuevas Barron, Ms. Mensah-Williams and Swedish MP Rosanna Dinamarca.

The IPU also held three side events at the CSW. To get a feel for the events, see our Storify piece.