Kuwait: “Men have to believe in women’s ability to make a difference in society”

Kuwait: “Men have to believe in women’s ability to make a difference in society” 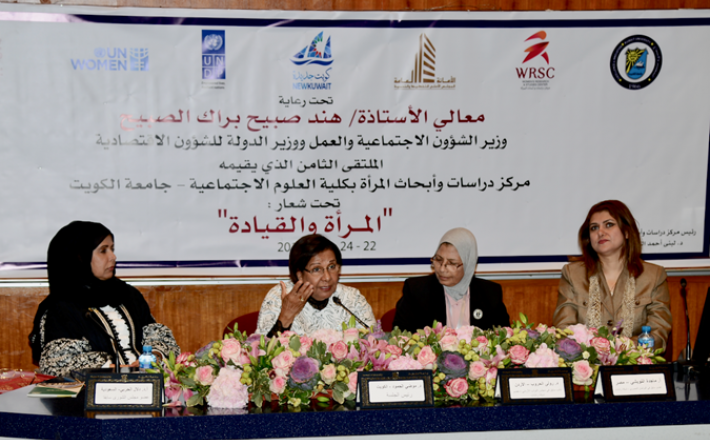 Dr. Moudi Abdul Aziz AlHumoud (PhD) is a women’s rights advocate from Kuwait. She is one of the first women to hold ministerial positions in her country, first as Minister of State for Housing and Planning and later as Minister for Education and Higher Education. She has also served as President of the Arab Open University and Dean of the College of Administration at Kuwait University. Dr. AlHumoud participated in the Annual Conference on Women and Leadership organized by the Women’s Research and Studies Center at Kuwait University in partnership with the General Secretariat of the Supreme Council for Planning and Development and supported by UNDP Kuwait and the UN Women Regional Office for the Arab States.

How was your experience as one of the first Kuwaiti women who assumed a leadership position in the country?

I was pretty active in the women’s movement since I graduated as a PHD back in the 1980’s. There was a huge women’s movement, we were campaigning for women’s rights, labour rights and political participation. I knew what I wanted to achieve for women in Kuwait. I also had a great support from my male colleagues at the University. We were only two female faculty members in the Business School back then. Later on, I had the support of male colleagues in the government. I had a number of male mentors who supported me in my career. I tried to work hard for my rights as a woman and for my professional career and luckily I have succeeded.

What do you think are the main challenges for women and girls to access leadership roles?

The first challenge for any woman is that we have to create a balance between our personal life and our career. I am a wife and a mother of five children. I have to keep my family and keep my career and this balance is very difficult to achieve. The second challenge is the social acceptance of women acting in positions of power. This is not easy. When I was promoting women’s rights, I had to participate in debates, television interviews and public lectures and most of the participants were men. Sometimes they thought I was against the social norms or trying to break the boundaries; whereas in fact I was only asking for our rights in society. But slowly they started to accept. The third challenge is that you have to convince your colleagues and employees that you will be good as a female boss. You have to prove yourself and others that you have the necessary capacity. Lastly, we have an additional challenge, in that as a woman it is very difficult to network with men, particularly according to the usual ways of networking in this society. You have to find alternative ways to connect with people, with men, employees. My approach was to write a weekly column in a national newspaper.

How has the situation of women changed in Kuwait in the last decade?

One of the most important milestones for Kuwaiti women in the last years was gaining full political rights. In addition, the increase in the percentage of women’s participation in the labour force. We have also seen an increase in the participation of women in management and decision-making positions in the private sector and the government. This is a social change that needs time and awareness. For instance, when I took office in the Ministry of Education, I pushed to have a higher number of Kuwaiti girls obtaining scholarships to study abroad. This has contributed to creating a difference in society.

We still need government support for women. I would like to see more than one female parliament member. I would like to see more than two female ministers in the cabinet. We have to put more pressure on our decision-makers to promote the access of women to higher positions in the State administration. We still have a lot of work to do on legislation. For example, the adoption of a nationality law to allow women to pass their nationality to their children and laws to improve women’s access to land and loans.

How can we engage men to support women’s empowerment in Kuwait?

Many of the things that I have achieved throughout my life have been possible in part thanks to the support of men in different capacities. Starting with my father, my husband later, my male colleagues at the university and eventually my colleagues in the government. I would like to see this kind of coaching for all qualified females in the country. Men can play a big role in supporting women to access leadership positions and to be empowered. Male leaders have to promote equality of opportunities and they have to believe in women’s abilities to make a difference in society and support them to achieve their goals.