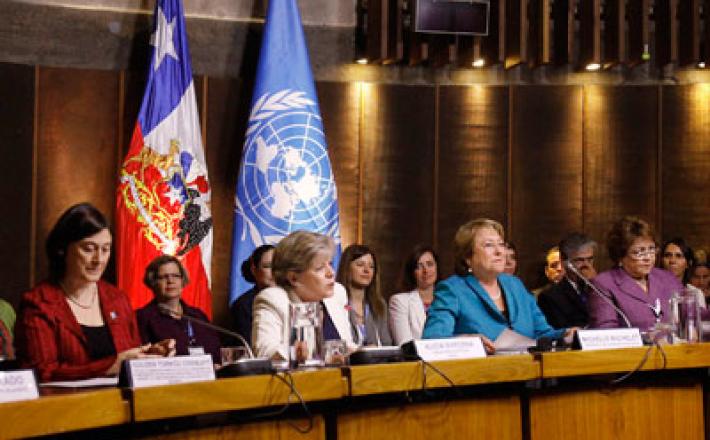 After two days of rigorous and productive discussions during the Latin America and Caribbean Special Session on the Beijing Declaration and Platform for Action, delegations from 21 countries unanimously reaffirmed the region’s commitment to the Platform for Action, and the goal to remove  barriers that prevent women's active participation in all spheres of public and private life.

The regional review was held in Santiago, Chile from November 18-19 hosted by the Economic Commission for Latin America and the Caribbean (ECLAC) and UN Women. The event was inaugurated by Chilean President and founding Executive Director of UN Women, Michelle Bachelet. ECLAC Executive Secretary Alicia Barcena, Minister Alejandrina German, Chair of the Regional Conference on Women in Latin America and the Caribbean and Gülden Türköz-Cosslett, Director of the Bureau for Policy and Programmes at UN Women were in attendance.

During the Special Session, ministers and other high-level authorities of the national women’s machineries, as well as civil society representatives, recognized the achievements, progress made and remaining gaps in the past 20 years and emphasized that the human rights of women and girls are essential to eradicate poverty and attain higher standards of equality, peace and security.

The outcome Statement of the regional review makes specific reference to the need for adequate resources to develop and activate gender equality policies in the post-2015 development framework. Other points include a clear call for the establishment of a committee integrated by ECLAC, UN Women and governments from the region to work on the issue of gender-sensitive budgeting and financing.

Civil Society organizations are preparing a common position document, supported by UN Women, on the achievements and gaps in the implementation of the Beijing Platform for Action to be concluded ahead of the fifty-ninth Commission on the Status of Women (CSW59) in March.

Gülden Türköz-Cosslett of UN Women said she was confident that this meeting in the Chilean capital would enable the region to provide powerful messages and concrete recommendations at the 59th session of the CSW, mentioning high levels of femicide and impunity for perpetrators of violence against women as areas to address. Ending on a positive note, she said, “your views, your voices and your experiences are an invaluable contribution that must be clearly reflected in this review of the Beijing Platform for Action. As in previous years, we count on Latin America and the Caribbean's constructive leadership."