Making laws work to end violence against women and girls

Making laws work to end violence against women and girls 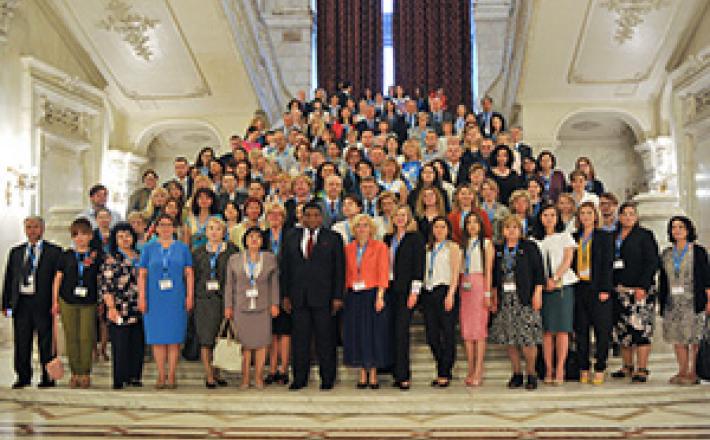 Preventing violence against women and girls (VAWG) requires more than adopting laws—they need to be effectively implemented. Parliamentarians, NGOs and legal officers met to discuss the issue at a regional conference for Eastern and Central Europe on Making Laws Work to End Violence against Women and Girls. The conference, held from 12 to 14 June, was co-organized by the IPU, Vital Voices, Global Rights for Women and the Romanian Chamber of Deputies, with the support of the Senate of Romania.

“At the IPU, we believe that monitoring and evaluation mechanisms should be based, at least in part, on parliamentary oversight,” said IPU Secretary General Martin Chungong in his opening remarks. “In accomplishing that task, parliamentarians must work hand in hand with civil society organizations and governments to access information and data, and prioritize measures and policies rooted in the reality of their countries.”

He also called on the “silent majority of non-violent men” to assume their responsibilities alongside women. “We have to count on men and boys to embody a new social construct of non-violent men and relationships built on respect.”

The outcome document outlined several strategies for ending VAWG. These include: multisectoral collaboration for a strong community-coordinated response; a focus on the victims in terms of providing them with a safe space to report violence, an array of services to meet their needs, and tools to counter victim intimidation; placing the burden of holding abusers accountable on the criminal justice system; educating children on human rights and gender equality; and engaging men.

At the conference, country delegations composed of parliamentarians, NGOs and government officials formulated action plans to apply the knowledge gained at the conference to their respective countries.

Watch the video of the Inaugural Session.