Nepal: Call for women’s representation and leadership in local governance

Nepal: Call for women’s representation and leadership in local governance 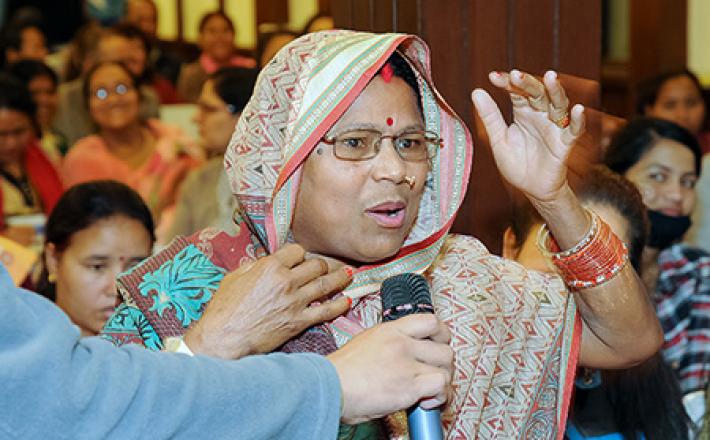 Nepal — "I am contesting the upcoming election with my headscarf on, duly following the advice of my mother-in-law. But I have offered my full support to my daughter-in-law to contest the polls without the scarf" says Kausilya Tharu, 45, who came all the way from Bara district in western Nepal to participate in the national conference. She is one of the 39 women participants contesting local polls in the second phase of the local elections scheduled for June 14.

With the promulgation of a new constitution in Nepal in 2015 that contains many positive provisions to advance gender equality and women's empowerment, as well as due to Nepal's national and international commitments for the same, there has been significant progress in the country in the recent years. However, many serious challenges remain and a coherent approach among political parties is needed to ensure women's leadership and representation in local governance.

The two-day conference ‘Towards Planet 50:50-Enabling Women’s Leadership and Representation in Local Governance’, organised by the Election Commission Nepal, together with the United Nations and Sajha Abhiyan (Women's leaders' Coalition) was organized on 20-21 April 2017 in response to identified shortfalls in terms of women's participation and representation.

During the conference, various speakers highlighted the message that women's participation is more than numbers and filling quotas, and that the country needs to aim for female representation and participation that substantially transforms decision making in the political sphere.

Speaking at the inauguration session, Rt. Honorable Speaker of the Parliament, Ms Onsari Gharti Magar, said that women’s participation in local governance as voters is simply not enough. “What is more crucial is to push for greater leadership roles in the pursuit of national development.”

Similarly, Chief Election Commissioner, Dr. Ayodhee Prasad Yadav, requested all political parties to encourage women's candidacy in all posts as far as possible. “We need to put an end to the existing socio-economic and cultural discrimination against women to see them in the leadership roles.”

“Quotas help, special measures help, interest groups help, but it is when knowledge is put into practice that changes come,” said UN Resident Coordinator Valerie Julliand. “Transforming policy into practice highlights the tangible challenges and opportunities that lie ahead. At the end of it all, we need to have women who want to come to the table – this requires everyone supporting women.”

Women’s political empowerment and equal access to leadership positions at all levels are fundamental to achieving the Sustainable Development Goals (SDGs) and a more equal world. Similarly, the Constitution of Nepal (2015), Article 38-4, states that “women shall have the right to participate in all bodies of the State based on the principle of proportional inclusion.” Regardless, women continue to be significantly under-represented in political and electoral processes everywhere in the world – as voters, candidates, elected representatives or electoral administrators. Nepal is no exception.

The Government of Nepal (GoN) has successfully conducted the first phase of the election on 14 May 2017. It has announced 14 June 2017 as the date for the second phase of the election of local bodies and preparations are underway. These elections will result in at least 13,360 women being elected decision makers in 6,680 wards.