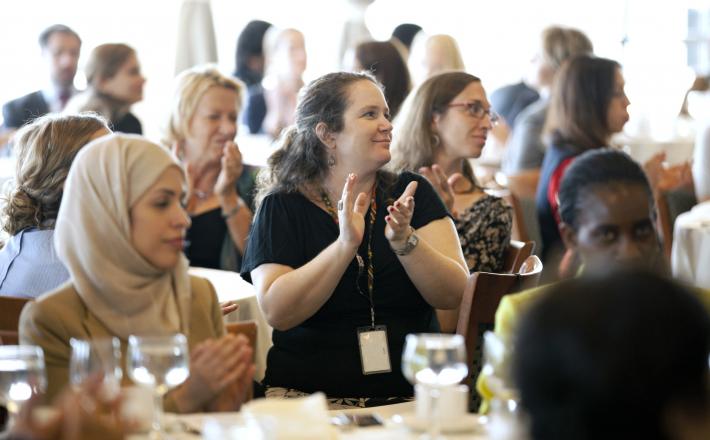 International Women’s Day (IWD) provides an ideal opportunity to look back on the gains made and the challenges that women of the world continue to face across all regions. Equally important, the IWD commemoration is about harnessing transformative initiatives and stepping up of global efforts to end all forms of discrimination against women from different backgrounds and identities.

There is a global consensus that the empowerment of women in all spheres of life is fundamental for any well-functioning, participatory and representative society and democratic governance. Yet, women’s empowerment remains elusive and the discrimination against women spans across the regions of the world from highly developed countries to developing countries.

In order to ensure that women’s empowerment is translated into substantive reality, the conceptual clarity on what empowerment entails and what women are up against is key-in other words how they can be resilient and resist the erosion and backlash of their empowerment. With the understanding that “women's empowerment is about the process by which those who have been denied the ability to make strategic life choices acquire such an ability”, such processes of change from disempowerment to empowerment require critical changes in socio-cultural and political processes.

Women’s empowerment inevitably threatens the status quo in all patriarchal societies and it is bound to meet with all forms of resistance at different levels in societies.  For example, the views expressed by a Member of the European Parliament on 1st March 2017 attests to the persisting resistance and struggles to dismantle patriarchy. Patriarchy which can be best described as a social system with social relations based on hierarchical relations between women and men and solidarity among them which enables them to dominate and control women. Not only are women controlled by dominant men using hierarchical social power, they are also controlled by non-dominant or less powerful men.

As the struggle for recognition of women’s rights and empowerment continues to face different forms of resistance, women have not given up and dare not to give up their visions for transformative change by pushing for substantive gender equality in all spheres of life. An important dimension for dismantling traditional patriarchal values, systems and practices requires an “unpacking” of power in gender relations, social norms and structural causes of women’s subordination and marginalisation.

It is evident that women’s empowerment is a political process, hence, women’s capabilities in dealing with encountered  resistance needs  women’s individual and collective action  to organise themselves and act in line with their  practical needs and strategic interests. Although historical and political periods as well as socio-cultural and economic differences exist in the lives of women across the world, there are common factors that drive resistance to women’s empowerment. These are for instance, gender norms and expectations that are at the heart of the continued subordination and marginalisation of women in all spheres of life across the world.

Gender norms are rooted in complex multiple factors often due to socio-cultural, economic, political, structural and legal dimensions that are driven by patriarchal and cultural attitudes as well as religious based interpretations and value systems. Deeply rooted inequalities such as strong gender stereotypes about women not being as good as men in positions of political leadership persist around the world.

Legal systems and legislation have been the focus of women’s empowerment advocacy because they have the potential to promote women’s empowerment and if they are discriminatory, such laws can also reinforce the unequal power relations between women and men.  Across the world, laws which establish that women and men have equal rights provide an important basis for demanding and pursuing women’s empowerment in practice. Knowledge resources and tools such as the Constitution Assessment for Gender Equality which was developed by International IDEA outlines the fundamental issues that affect women’s rights and gender equality which should be guaranteed in national constitutions and be implemented. Constitutions are therefore a significant bedrock in the struggle for greater women’s empowerment and gender equality, especially within the context of the adoption and ongoing implementation of the 2030 Agenda.

In spite of the existence of laws that outlaw violence against women, including-domestic violence, political violence and sexual harassment, provide guarantees for equal pay, women’s equal property rights and women’s right to vote and to be voted for, these gains remain under consistent threats and the  struggles for protecting them are unending. This is because the resistance to women’s empowerment tends to defy legal and constitutional guarantees on equality. Therefore the various forms of patriarchal resistance must be tackled systematically and consistently.  It is a fact that the effective tackling of patriarchal resistance is strongly influenced by women’s self-esteem as this determines their adaptive capacities and strategies of their resilience towards the persisting resistance to the achievement of their empowerment.