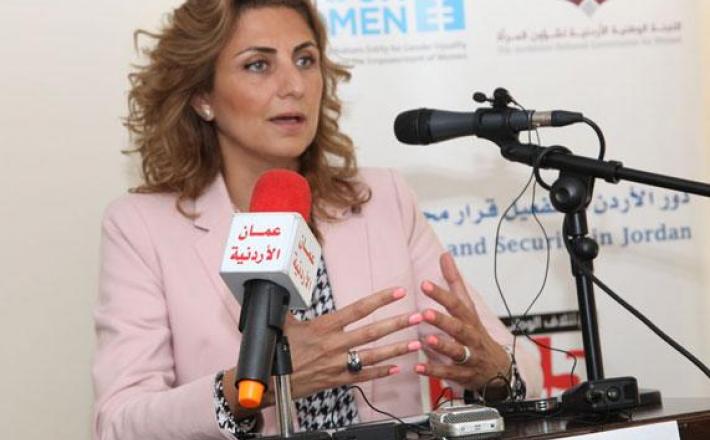 The Jordanian coalition on UN Resolution 1325 on Monday highlighted the Kingdom’s efforts in reactivating the decision that focuses on women, peace and security in light of the violent conflicts in the region.

During a meeting with the press at the Kempinski Hotel in Amman, coalition members outlined the achievements that the Kingdom achieved in this regard and touched on what still needs to be done.

The UN resolution, which was adopted in 2000, addresses women's safety and security in times of war and conflicts, considering women as an active factor in peace and war, and committing UN member states to take measures to implement the decision.

“Jordan was one of the pioneering countries in taking part in the peacekeeping missions, including women from our Jordanian forces,” Salma Nims, the secretary general of the Jordanian National Commission for Women (JNCW), told reporters.

The “conflicts surrounding us have also pushed us to draft a National Action Plan (NAP) to ensure women’s contribution in peace and security”, Nims added.

The JNCW secretary general added that the NPA is also designed to “fight extremism and address its causes”.

“We have done several activities with locals in various governorate to explain the resolution and called on the participants to pinpoint their priorities and their ideas about fighting extremist ideologies,” Nims added.

Lana Ghawi-Zananiri, the manager of gender and media unit at the ARDD- Legal Aid, said the resolution is over 15 years old and it is time “to take concrete measures to reactivate it and implement it”.

“We have to always be ready for any emergencies or conflicts, including getting women prepared and ready to take part in peacekeeping missions worldwide and working at the grassroots level,” Ghawi-Zananiri said.

Retired Police Brig. Gen. Kafa Halaseh highlighted women’s participation in peacekeeping missions. She said that “Jordanian women are more than qualified to take on such missions”.

“Dozens of Jordanian women from the army, police and the Civil Defence Department took part in peacekeeping missions since 2007 in countries such as Libya, Sudan, Afghanistan, Liberia and Ivory Coast,” Halaseh said.

The female peacekeeping missions involvement in these countries, according to Halaseh, included awareness raising sessions on violations committed against women and children, providing aid and psychological to the needy and providing medicine and medical care.

“We have dozens of female officers who have been trained and ready to take part in any peacekeeping mission in any part of the world,” Halaseh assereted.

The event was organised by the JNCW in coordination with a local coalition and UN Women, and supported by the governments of Japan and Finland.