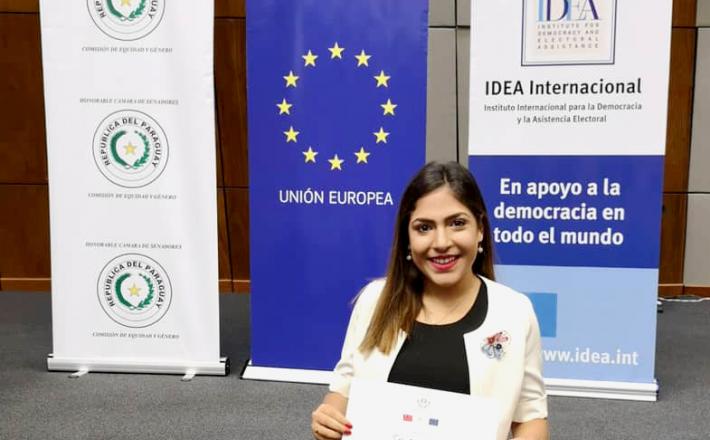 Polite, buoyant, and idealist: In many ways, Sol Arrúa comes across as a regular 21-year-old. However, as soon as we bring up the subjects of politics and leadership, which she is most passionate about, it becomes clear that there is much more about Sol than meets the eye.

“If we treat all inequalities equally, the problem is just going to get worse,” she says. “What we need to look for is equity. That is why measures such as democratic parity are so important”, she adds, demonstrating a clear understanding of conceptual frameworks for grounded political action.

Sol is an alumna of the Academy for Political Training of Women Leaders, an initiative of the Equity and Gender Commission of the Paraguayan Senate, which is one of the main boundary partners of International IDEA Paraguay Programme, in the framework of the project “Consolidation of Paraguayan Democracy II” (2019-2023), with funding from the European Union.

As a graduate from the Academy, and as a young female leader, Sol is an intersectional example of the project’s impact, aimed at improving the political participation and representation of women and youth as broadly defined demographics. She is a law student from Villarrica, in the Guairá department, and claims that this origin has made her more sensitive to the struggles of underprivileged people: “when you come from the countryside, you are much closer to the deep realities of Paraguay,” she notes.

Sol is a young leader who has been in the making for some time. She has participated in several training programs, both locally and abroad, but says that her experience at the Academy for Political Training was pivotal to help her realize the scope of her potential: “I embraced my own leadership before participating in the Academy, but it was only there that my leadership found a purpose,” she says. “I could see all the obstacles women face when aspiring to public office, and I said to myself ‘this is not normal, this is not right’. Without the opportunity provided by the Academy, I would not have known these limitations and these realities,” she adds.

Click here to read the full article published by International IDEA on 11 March 2021.