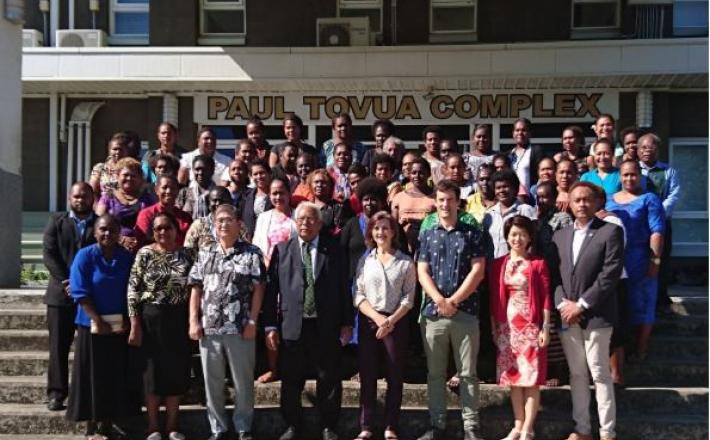 As a response to gender norms that continue to work against women’s entry into politics, 50 women across the eight provinces of the Solomon Islands are currently gathered in Honiara for the Second Practice Parliament for Women.

According to the International Parliamentary Union (IPU), these gender norms lay stronger emphasis on women’s role in the unpaid, domestic sphere.

In the 40-year history of the National Parliament of Solomon Islands, it has only seen a total of four women MPs – two of which are current MPs, the Honourable Freda Tuki and the newly elected Honourable Lanelle Tanangada.

“In February 2014, the National Parliament hosted a similar event bringing women leaders around the country. As hard and challenging the elections are, it is our pride and great achievement in seeing three of the participants make it through. At the national level we have Honourable Freda Tuki and Hon Lanelle Tanangada. At provincial level, we have Honourable Joycelyn Ipei and Honourable Roselyn Liata and Hon Jane Tozaka.”

“In 2017 the National Parliament launched its five-year Strategic Plan 2017-2021. For the first time in the history of our Parliament the Strategy Output 2.8 provides for Gender Mainstreaming in Legislation. Meaning that Parliament as the “oversight” arm of the State, ensures that an impact assessment on both men, women, girls and boys must be complied to when conducting the core functions of parliament.”

Honourable Nasiu added, “I take this occasion to acknowledge the governments and the people of New Zealand and Japan through the United Nations Development Programme (UNDP). The support demonstrates commitment towards regional stability especially encouraging reforms on equal opportunity for men and women in the Pacific including Solomon Islands.”

As of May 2018, women have never comprised more than 30% of the membership of national parliaments in Forum Islands Countries since Independence, and the percentage of women in Pacific parliaments currently hovers at 7.5%.

Echoing a similar statement at the opening, the Country Manager for UNDP Solomon Islands, Azusa Kubota highlighted the importance for an equal playing field for women to participate effectively in politics.

“If a woman desires to have the honor to represent the people, she should be able to contest in a level-playing field. If there are barriers to that equal opportunity, we should work towards removing them such as by changing a law, reserving seats and/or providing facilities to support women candidates,” said Kubota.

“Through the five days, it is hoped the women leaders will all gain greater insights into the work of the National Parliament, an institution that we hope they will be a Member of if they do decide to stand for the upcoming general elections.”

A concerted effort was made to target women from rural as well as urban areas.

The Practice Parliament for Women in the Solomon Islands was made possible through the UNDP Pacific Office in Fiji funding through two Pacific regional projects under the Effective Governance programme, namely the Strengthening Legislatures in the Pacific Island Countries Project (SLIP) Project funded by the Government of Japan, and the Pacific Parliamentary Effectiveness Initiative (PPEI), funded by the Government of New Zealand.