Take five: “Demand to have a seat at the table, don’t wait for an invitation”

Take five: “Demand to have a seat at the table, don’t wait for an invitation” 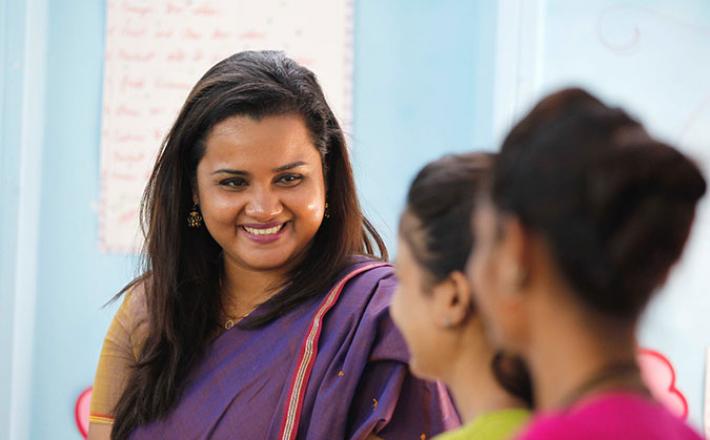 As hundreds of youth activists from around the world convene at the United Nations for the annual Economic and Social Council (ECOSOC) Youth Forum, from 30-31 January 2018, UN Women spoke to Jayathma Wickramanayake, the UN Secretary-General’s Envoy on Youth. Ms. Wickramanayake is the first female Youth Envoy, and have worked on youth issues since the age of 21. Prior to joining the United Nations, in her home country, Sri Lanka, she created a youth movement for civic and political engagement named “Hashtag Generation”, and has served as the member of the Youth Parliament, among other positions.

The 2018 ECOSOC Youth Forum will bring together youth from around the world at the United Nations. What is on the agenda and what can young people expect from the Forum?

The ECOSOC Youth Forum is the largest gathering of young people at the United Nations. This is the sixth year of the Forum and more than 500 young people and 200 officials, including Ministers responsible for youth, will come to New York to discuss the issues that youth around the world are facing. Together, youth leaders, activists and officials will propose new approaches and initiatives for advancing the youth development agenda.

The topics on the agenda directly affect youth, like sustainable energy for all, safe and inclusive cities, access to clean water and sanitation, protecting our forests and biodiversity, and building partnerships to achieve these goals. The Forum will also feature a SDG Media Zone, where many young people from all over the world will be sharing the work that they are doing to achieve the Sustainable Development Goals. This is an opportunity for young people to shape the policies and programmes that impact their lives and reality.

We hope that young people around the world who cannot join in person, can be part of the Forum by joining the online conversations. Follow the accounts @UNYouthEnvoy @GlobalGoalsUN and @UNECOSOC, and the hashtags #Youth2030 and #SDGLive, and raise your voice on social media about youth issues.

What are the top priorities that young women and girls are raising?

There are 1.2 billion of young people in the world—the largest generation of youth that the world has ever seen [1]. Half of these are young women. While young people face discrimination based on their age, young women face an additional layer of discrimination because of their gender. For every young woman to reach her full potential, we need to ensure that all of them have equal opportunities. And we cannot achieve that goal without ensuring gender equality and putting an end to gender-based violence.

Despite recent improvements, young women and girls are still too often affected by violence, discrimination, and lower access to education and employment than young men. And indeed, they demand changes now. Over 35 per cent of women have been affected by physical or sexual violence, including young women [2]. Over 750 million young women and girls are married before their 18th birthday [3], which often prevents them from pursuing education and employment opportunities.

In terms of education, we need to do better too. In the least developed countries, barely 60 per cent of girls complete primary school, and just 30 per cent go to secondary school [4]. Young women also have lower literacy levels than men in 20 per cent of the countries [5]. Even when they have access to education, women are likely to earn less than men in most countries.

We need to address these challenges quickly if we want to ensure that our current generation of young women get the same chances as their counterparts. At the end of the day, achieving sustainable development will remain a dream, rather than a reality, if we are leaving 50 per cent of our population behind.

How is the work of the UN and the Sustainable Development Goals (SDGs) relevant for young people in countries, far away from the United Nations where these discussions are taking place?

The best thing about SDGs is that they are universal. They apply to you regardless of where you are—in the global north or south, in a country with high GDP or a lower GDP—one or many of SDGs will apply to you. They are a very useful set of guidelines—a road map—to build a more sustainable and inclusive for all of us, ensuring gender equality, peace and security, decent work, and health and well-being for everybody, for example.

Achieving the SDGs can have a very meaningful and positive impact on everybody’s lives. And we all have a role to play in working towards the success of the SDGs. Every young person and every little action can make a major difference to achieve them.

For example, you can take action on gender equality in many ways. You can encourage people in your community to speak out against discriminatory behaviours. Teach young women useful skills that can help them advance their career, or offer support to young women around you who are in a vulnerable situation. Every initiative counts and we can all contribute to achieving the SDGs.

How can we make sure that the SDGs benefit young women and girls equally?

The way to ensure gender equality is by making young women and girls a priority! Whether we are working towards achieving quality jobs and economic growth, quality education, or access to good health and well-being, we must make sure that everybody can benefit, including young women and girls. We should not leave anybody behind.

I have seen in some practical instances, when there are opportunities, we often try to give the option of “women or youth”. It shouldn't be a choice. Women and youth, especially young women, should receive a priority in all our interventions from international level to the grassroots.

All young people need to be our partners in achieving gender equality, and that includes young men and boys. Educating and empowering young people to advocate for gender equality is perhaps the most important thing we can do to put an end to gender-based violence and harmful gender stereotypes that stand in the way of achieving the SDGs.

We need to teach the values of gender equality to young men early on so they can carry them throughout their lives, and educate and encourage their peers to follow these values. In one sentence, every young man needs to be a “He For She”!

Since I was in school, I have been very active in my community, and volunteered both in and outside my school. In 2012, I became the first-ever Youth Delegate of Sri Lanka to the United Nations. As I was finishing my tenure in 2013, I got involved in the International Youth Task Force of the World Youth Conference 2014, and became a Senator in the Youth Parliament of Sri Lanka. By then, I was aware of the challenges that young people were facing around the world, such as the scarcity of decent jobs and the skills gap between young people and the labour market. More than 40 per cent of the world’s young people were either unemployed, or working but still living below the poverty line [6]. It was clear that we needed to do more to empower youth and advocate for them.

Another issue that I noticed was the lack of representation of youth, particularly young women, in politics and government in my own country. That’s why I co-founded a grassroots organization called Hashtag Generation in Sri Lanka, to build the capacity of young people and young women, to participate in politics in my country.

When I was nominated and appointed as the Youth Envoy, I accepted this role with the ambition to scale up the change I was pushing for at the national level to an international level. I am committed to this mission.

To all young women reading this, aspiring to be leaders, I want to say, believe in yourself and your power to change the world. Act now, speak up, and stand up for your rights and your ideas. Demand to have a seat at the table, don’t wait for an invitation. Support and encourage other young women around you to take action and advocate for their rights too.

And if you ever feel let down, remember that a young woman, just like you, is in the United Nations, rooting for you.