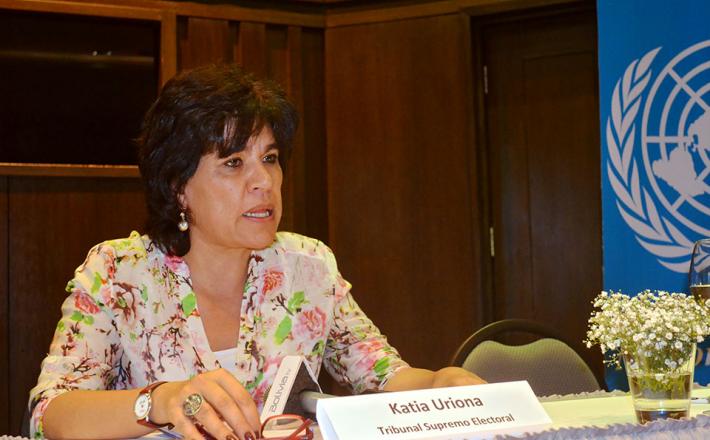 Katia Uriona is the former President of the Electoral Tribunal of the Plurinational State of Bolivia. Before that, as the Executive Secretary of the national Women’s Coordinator (Coordinadora de la Mujer), Uriona played an instrumental role in advocating for Law 243 on violence against women in politics in 2012. With the support from UN Women and other organizations, she gave an important drive to the Observatory of Parity Democracy. In March 2018, Ms. Uriona took part in an Expert Group Meeting on violence against women in politics co-organized by UN Women and the Office of the United Nations High Commissioner for Human Rights. Most recently, the Electoral Tribunal conducted a country wide consultative process which informed a draft Bill on Political Organizations. The new Law on Political Organizations (Law 1096) approved by the Bolivia’s Plurinational Legislative Assembly on 1 September 2018, is aligned with the constitutional principles of parity and intercultural democracy.

Bolivia has the second-highest rate of women’s legislative representation in the world, at 53 per cent. So why does violence against women in politics continue?

Women occupy 50 per cent or more [of elected positions in Bolivia] now, and men cannot easily accept this. It has generated forms of violence against women never seen before in the political arena. Legal reform did not change patriarchal systems or machismo culture overnight and the backlash against women in politics has been swift and widespread. Incidents of violence against women in politics became especially apparent in local governments, adding impetus to ongoing efforts by the women’s movement to address them.

Media attention and public awareness of the extent of violence against women in politics in the country was heightened after the tragic assassination of Councilwoman Juana Quispe in 2012, sparking nationwide protests, and leading to the passage of Law 243 Against Harassment and Political Violence against Women.

Why is Bolivia’s stand-alone law on violence against women in politics so ground-breaking?

Because it is the world’s only stand-alone law criminalizing violence against women in politics. Law 243 typifies 17 acts of harassment and political violence against women and establishes how to deal with such cases. It is not limited in its application to women in public office, but also extends to women appointed to or exercising any political or public role. It also establishes penalties, ranging from two to five years in prison for harassment and three to eight years for political violence.

How has this law made a difference? Hasn’t violence continued regardless?

Law 243 has been invaluable in bringing visibility to violence against women in politics in Bolivia, though challenges remain in its implementation. A regulatory decree was approved in 2016, which clarified many aspects of implementation and the role of different actors. The Electoral Tribunal, for example, works to ensure compliance with parity, and supports women who bring their cases forward.

Departmental courts have created mediation spaces to meet with aggressors to try and stop acts from escalating. They are also increasingly publishing cases to enable stakeholders to better identify, prove and record evidence of the societal impact of violence against women in politics, to improve sanctioning mechanisms.

The creation of an Observatory for Parity Democracy—which monitors both gender and intercultural parity and the political rights of women—was also a significant related result.

Why is the Observatory important?

The Observatory for Parity Democracy raises visibility and awareness about a range of issues related to women’s political participation, including violence, and it generates data. It also accompanies victims to the Ministry of Justice. The Observatory, together with the Electoral Tribunal and other actors, are developing indicators for violence and harassment against women, a system for follow-up and protection, connecting all relevant authorities through technology, as well as providing training and immediate support systems for survivors.

The Observatory has prepared gender profiles of political parties and institutions to take stock of gaps and needs. This informed a draft Law on Political Organizations, which was presented by the Electoral Tribunal to the Legislative Assembly in June and approved on 1 September 2018 (Law 1096). The law includes criteria for parity and alternation in candidate nominations, specific budgets to support women candidates’ campaigns, as well as provisions for gender equality and women’s rights in both organizational structures and policy agendas.

What are you working on now, ahead of the 2019 presidential elections?

The Electoral Tribunal has been working to promote and strengthen the participation of women in the political arena, on equal terms, by: promoting coordination with operators for the effective application of Law No. 243; promoting alliances among diverse political actors; conducting studies and research on obstacles and barriers to women's political participation; and promoting awareness of the specific articles of mechanisms against harassment and political violence established in the new Law 1096 on Political Organizations.