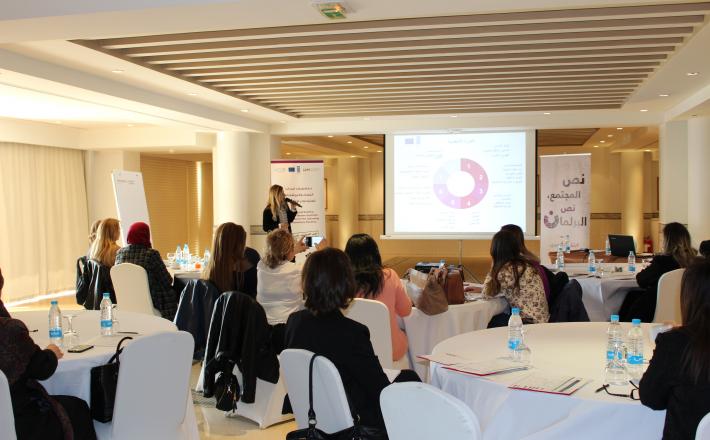 The Office of the Minister of State for Women’s Affairs in Lebanon and TheUnited Nations Entity for Gender Equality and the Empowerment of Women, in partnership with the United Nations Development Program- LEAP and the European Union organize a six-day training program, divided in two phases, on electoral campaigning management and skills development targeting a group of women involved in the upcoming parliamentary elections of May 2018. The first training kicked off on February 5, 2018.

The event held at Mövenpick hotel between February 5 and 10, 2018 comes in the context of the Roadmap for Political Empowerment and Leadership of Women in Lebanon and aims to enhancing the capacities of the Lebanese women aspirants, candidates and women in political parties to manage and engage in the upcoming elections. It is divided in two phases and targets two groups of participants for a total number of 45 women.

Each group of women attended five sessions over three days which included theory and practical elements, a description of the electoral system and actors in the electoral process according to the Lebanese constitution and the electoral law. The participants were also informed about the components of a successful electoral campaign and the process for formulating a plan for it. They were also provided with practical tools on forming the electoral campaign’s team and with instructions on the basic skills for communicating with the public.

The Roadmap for Political Empowerment and Leadership of Women in Lebanon was launched in Beirut on 17 January 2018 at the conference "Fostering the role of political parties to promote women representation in the upcoming parliamentary elections" under the patronage of Prime Minister Saad Hariri.

The Roadmap aims to building the capacity of women leaders, women candidates and voters (male and female) to promote women's representation in politics. The Roadmap also consists of a broad advocacy campaign including the launch of a media awareness campaign under the theme "Half the society, half the parliament" to promote and support women's participation in politics and advocate for political parties to endorse women candidacy in electoral lists.